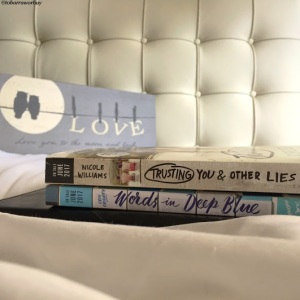 Phoenix can’t imagine anything worse than being shipped off to family summer camp. Her parents have been fighting for the past two years—do they seriously think being crammed in a cabin with Phoenix and her little brother, Harry, will make things better?

On top of that, Phoenix is stuck training with Callum—the head counselor who is seriously cute but a complete know-it-all. His hot-cold attitude means he’s impossible to figure out—and even harder to rely on. But despite her better judgment, Phoenix is attracted to Callum. And he’s promising Phoenix a summer she’ll never forget. Can she trust him? Or is this just another lie?

*I received a free advanced reader’s copy of this book from First in Line and B-Fest. This did not influence my review of this book in anyway. This is an honest review of the novel as I saw it. This novel was released on June 20.*

It’s officially summer, which means it’s time to pull out those contemporaries and get into a summer time vibe and Trusting You & Other Lies is the perfect book for that. Set at a family summer camp that was giving me serious Dirty Dancing vibes (the original, not the remake), we find Phoenix, her little brother, Harry, and their parents trying to pretend their family is way more functional than it actually is.

Phoenix is pissed at her parents because they’re in dire financial straits, but rather than tell Phoenix and Harry the truth they’ve been hiding it, though Phoenix has discovered their dirty little secret. Of course, rather than confront them she decides to be passive aggressive and has decided from the get go that she will not like this camp she’s being forced to attend.

Of course, that’s when Callum steps in. Callum is cute, mysterious, and everything you’re looking for in a summer fling. While Callum trains Phoenix to be a counselor it becomes more and more obvious that there’s an attraction between them, but Phoenix has serious trust issues, and not just because of her parents; her ex cheated on her right before she went to camp. As Phoenix tries to figure out her feelings for Callum (and his feelings for her), she also has to decide if she’s willing to forgive the ones who’ve betrayed her trust and learn to trust again.

While there were definitely some cute and swoonworthy scenes in this novel, I wasn’t all that impressed with Phoenix and Callum’s romance. Honestly, I wasn’t a big fan of Phoenix or Callum. They both annoyed me a lot throughout the novel and I just wanted to shake them and ask, “Why are you like this?” Harry was honestly my favorite character.

I was also kind of annoyed about some things that were mentioned and then never explained, mainly about Callum’s brother. I know Callum’s supposed to be mysterious but he’d just drop these tiny bombshells about his brother and then never say another else about it, which I found so irritating.

Besides that though, this was a decent romance and it was a pretty quick read. I probably wouldn’t read again but I didn’t hate it. Basically, it was meh.

“You are the porterhouse [steak]. The best. All those other girls, any other girl, they’re packing popcorn.”