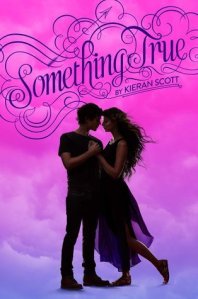 *This book is part of my POPSUGAR 2015 Reading Challenge*

True Olympia is in the home stretch. After being banished to Earth without her powers as punishment for falling in love with a mortal, True was tasked with matching three couples before she could return home. Now, with two couples fully in love, she is ready for her time in New Jersey to come to an end.

But as easy as it should be to match one more couple, things are complicated by her immortal love Orion (who also appeared on Earth, just without the memory of their love). He’s dating another girl, but can’t seem to avoid spending time with True. Something about her finally seems familiar to him. But if True wants to get back with Orion for real, she needs to focus. Just one more couple, one more couple…

After not being very impressed with Complete Nothing I was surprised by how much I really enjoyed this book. As the last book in the True Love trilogy this book tied up every lose end in a really nice way. I’m not saying this was the next great American novel or anything but it was a nice fun read, especially after just finishing Gone Girl.

Following the same outline as the last two books, Something True follows True trying to match her last couple. One small difference, however, was rather than show True and the two people she’s trying to set up point of views this novel showed True, Orion, and Darla, Orion’s girlfriend’s, point of views. This set up makes sense for the story since these are really the three main characters of this book but it is worth pointing out that this book went a little off script.

The appearance of Orion in True’s mortal world is definitely both a positive and negative for True. Add in Artemis and Apollo as mortals and True finds herself in some very sticky situations. Having to juggle her love for Orion while watching him date another girl and try to make sure her last couple gets together before it’s too late is a lot for one goddess to handle.

But that’s what makes this book so fun. There was so much drama, so much love, and so many moments that made my heart swoon. It was a cheesy, fun, romantic novel that I will probably reread when I want to believe in love again. A great end to a trilogy.

Borrow or Buy: Buy! This may seem strange after I said to just borrow Complete Nothing because who buys one book in a trilogy? However, I stand by both of my choices and honestly I think you can read these books as stand alone’s so you don’t really need all three. And this one is definitely my favorite of the trilogy.

This was it. This was where I was supposed to be.

3 thoughts on “Book Review: Something True”