Sadly, I haven’t been able to keep up with my reading as much as I would like to since being in college. However, I still make time to read and these are the five books that I can’t wait to come out in 2014.

Yes I know this one isn’t really a book but a novella but I’m still excited (even though I’m totally Team Maxon). If you haven’t read the first two books in The Selection trilogy you should definitely look into them because its awesome. The focus is a girl named America, who is entered into this Bachelor style contest to win the prince’s heart and the throne. Filled with drama, love triangles, and threats from rebels this trilogy has it all. This new novella will show more into the life of Aspen, America’s ex-boyfriend, and give us more insight into his story. What I’m most excited about is the preview of the next and last book in the trilogy that’s supposed to be included at the end of the novella. Which brings me to number two.

I’m both equally excited and saddened by the oncoming release of this book. I quickly fell in love with this trilogy reading the first two books in two days and then proceeding to re-read them over and over again to this day. I will be sad to see this trilogy come to an end (fingers crossed for a spin off series) but I’m also very excited to see how it’s all going to end (Team Maxon!!!). This is definitely a book I’ll be pre-ordering. 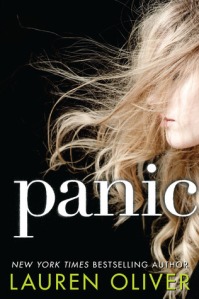 I became obsessed with Lauren Oliver when I read her first book, Before I Fall, and her Delirium trilogy (even though I hated how it ended). This new book (already being optioned for a movie) focuses on not only a young girl but a guy as well which is new for Oliver. Based in a small town where almost nothing ever happens (I can relate) graduating seniors play a game called Panic that has high stakes and even higher payoff if you win. It’s a mystery what the game actually entails but based on Oliver’s past writings you can expect a lot of love, drama, and intrigue, as well as the unexpected. I’m definitely in!

Out of all the new books coming out in 2014 this one is probably one of the most highly anticipated among young adults. Richelle Mead created this crazy, fictional world of vampires, dhampirs, and Alchemists in her Vampire Academy series (which is now being made into a movie franchise that I totally disapprove of but we’ll save that for another day). This spin off series focuses on Sydney, an Alchemist who at first hated vampires and everything to do with them, but now has become very accustomed and acquainted with them in more ways than one if you catch my drift. The last book left us with a major cliffhanger, leaving me to wonder what in the world is going to happen next. Sadly, it’ll be a while before we get the answer to that question.

Honestly, I haven’t even finished reading the last book and I’m already excited about this novel. Kate Brian (also known as Kieran Scott) is a master at producing series and trilogies that are made to get you hooked. From Private to Privilege to the Not-A-Blonde Cheerleader series, Brian knows exactly how to push our buttons, leaving us wanting more. Her newest trilogy, Shadowlands, is no exception. This trilogy had me hooked from book one when the ending left me with my jaw on the floor. Endless is the last book in this trilogy and I’m sure its going to be a spectacular conclusion that will probably make us wish it wasn’t all coming to end. Until Brian comes out with her next series that is.