Tina Fey is most definitely one of the funniest if not THE funniest woman in Hollywood. I loved her on Saturday Night Live (SNL) and I finally now have the chance to watch the acclaimed 30 Rock series (thanks to Netflix) even though it has now since ended.

First, Fey’s screenwriting is fantastic. Nothing proves this more than the fact that she wrote the screenplay for Mean Girls, a classic. 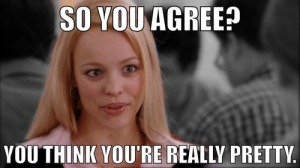 Fey created this awesome comedy sitcom that shows the hilarity of working on a variety show similar to SNL. Fey acts as Liz Lemon the main writer for The Girlie Show who struggles with social norms and would rather stay home watching TV and eating food then going out to the club (I can relate).

I’m not sure how much of Liz Lemon stems from Fey’s own personality but Lemon is a very relatable character. Along with Lemon and her team of writers are Lemon’s new boos, Jack Donaghy (Alec Baldwin), her friend and actor who I like to call crazy Jenna (Jane Krakowski), the famed movie star who joins The Girlie Show cast, Tracy Jordan (Tracy Morgan), and my new favorite NBC Page (I didn’t even know NBC had pages), Kenneth (Jack McBrayer).

This cast brings a lot of hilarity and funny situation that kept laughing way late into the night as I stayed up to complete the first season last night. This is definitely a show that everyone can get into and most certainly should. I give it five out of five stars.

How Long It’ll Take Me To Catch Up: Probably a week. I’m obsessed.

Do I Need to Start From the Beginning: You should. Its funny right from the start.