After waiting until season one ended I finally started watching The Originals last night and I’m already on episode six. I guess you could say I’m hooked.

From what may be the hottest cast I’ve ever seen to all the drama between witches and vamps this show is fantastic. As a spin off from my other beloved show, The Vampire Diaries, the producers and writers do a great job of using similar themes but with a much different plot line. The Originals is all about family: what makes a family and how a family should/does work.

Obviously the focus in the show is on the three remaining original vampires, Klaus, Rebakah, and Elijah. After the Originals left New Orleans a 100 years ago, running from the father, Klaus was lured back to New Orleans by witches who captured his one night stand, Hayley, who is pregnant with Klaus’ hybrid-werewolf baby. First, to clarify, a hybrid is a vampire-werewolf. Klaus is the original hybrid who was first a werewolf but was later turned into a vampire along with his siblings. Honestly at first I was a bit put off by this storyline. It reminded me too much of how Bella was somehow able to get pregnant by Edward in the Twilight series. It just seemed improbable.

But then when you really think about it you kind of realize that the whole concept of the show is improbable so there’s really no reason to try to find fault in the idea that a hybrid vampire could have a kid with a werewolf because none of these creatures exist in the real world to begin with.

Once I got over that I started watching the show and became obsessed instantly. In the Originals absence Klaus’ protege, Marcel, has taken over the city with his army of vamps. He has a secret weapon that keeps the witches in check and has removed all the werewolves from the town. The witches obviously don’t appreciate being controlled but because Marcel kills anyone that uses magic they needed a little help to get what they want. Enter the Originals.

I either love or hate every character on the show which is fantastic. Each character has so much depth to them and so much back story it’s hard to choose a side. I’m not sure if I want the witches to succeed or not. I do know that no one better mess with Haley and the baby because I’ll be upset. I absolutely love Hayley. I love her sass and she’s so strong willed.

I also love her ongoing flirtation with Elijah and I’m excited to see where that relationship goes. I want it to go very far but I have a feeling Klaus might not like that idea very much. Besides those two there’s a lot of love triangles and squares being formed on the show. So far Marcel has some kind of relationship with at least three ladies on the show. Basically, there’s a lot of hook ups and a lot of drama amongst the real drama of killing vamps and witches and even some werewolves? Maybe.

It’s become very hard for me to do anything but watch this show so I’m going to get back to that. If you liked TVD you’re definitely going to enjoy The Originals, maybe even more than TVD. Also, although it would be beneficial to have watched TVD before you jump into the spin off I think you’d be okay if you don’t. You’ll have to catch up on some stuff but The Originals is a whole different ball game than TVD. I love it.

How Long It’ll Take Me to Catch Up: Two days. Maybe a little more than that because I’m supposed to be packing but that’s what multitasking is for. *shrugs*

Do I Need to Start From the Beginning: Absolutely, yes. There’s no way you can keep track of everything that’s going on in this show if you just jump in from the middle. You gotta start right from the beginning and watch all the drama unfold in chronological order.

Stars: 5 out of 5. Like I said, I’m obsessed. Definitely a must watch. Plus, look at this cast. 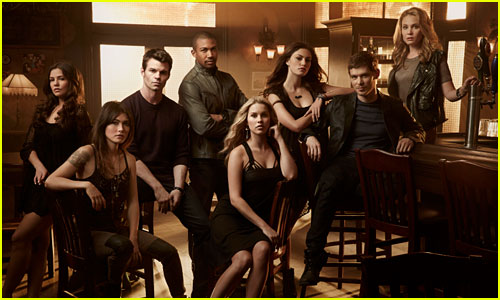 You could probably watch the show on mute and still enjoy. Just saying. Literally the finest cast I’ve ever seen.

Alright, there’s really only one thing that needs to discussed about last night’s TVD. Is Stefan really dead? It looks like he’s really dead and the other side is going under so there’s a 99% chance he’s really dead. However, this is TVD and people die and come back all the time so maybe this isn’t really the end. Maybe. As annoying as I found Stefan I really wanted him and Caroline to finally be together and it seemed like they were going in that direction. To just yank away such a great storyline just when it was getting good doesn’t seem plausible. However, they did kill Aunt Jenna right when she and Alaric’s relationship was in it’s prime so, I guess anything’s possible.

I just hope it’s not true in this case. For the first time in a long time TVD has truly stumped me. I have no idea what’s going to happen next. Will the other side actually be kaput? Will Bonnie die too? Will everyone die because once magic is gone that’s a wrap for everyone? Okay, obviously the last one can’t happen because then we wouldn’t have a show but still. How are they going to remedy the situation though? I just don’t understand. Where are they going with this?

Besides Stefan’s death a lot went down in this episode. Bonnie finally admitted that she didn’t have a plan for coming back from the other side. However, she then figures out a plan, something to do with using the same spell the Travelers used to get Marco out from the other side. Sadly, she needed the one Traveler that was actually on their side but she was swept away by some kind of typhoon on the other side before they could learn the spell. Oh dear.

Also, Damon and Elena finally realized they were being ridiculous and got back together (thank God).

The horrid Traveler spell, which strips everything magical except for their “pure magic”, has begun and taken over all of Mystic Falls. Therefore everyone’s day light rings have stopped working and all the vampires are being affected by whatever killed them in the first place. Not good. This leads all the vamps to pack up and leave Mystic Falls and Marco and his travelers have officially taken over, returning to their bodies.

Also, Liv and Luke, the witch twins as I like to call them, tried to kill Stefan and Elena in an attempt to stop the spell but it was too late. The spell was already in motion and Liv and Luke’s powers were fading fast.

This was probably one of my favorite episodes by far. I can’t wait to see how this season is going end. Is it crazy to ask that Katherine somehow reappears? Here’s my theory. She didn’t go to the Other Side. She went somewhere else (let’s call it Hell). I don’t know how but maybe everything that’s going crazy on the Other Side will lead to her return somehow. Or I’m just being really hopeful because I miss her. And Stefan. Why do they do this to me?

Here’s to hoping this isn’t the end for Stefan. I pray we all survive what happens next. Check out the preview for the next episode below and it’s not over until it’s over guys. Keep hope alive!