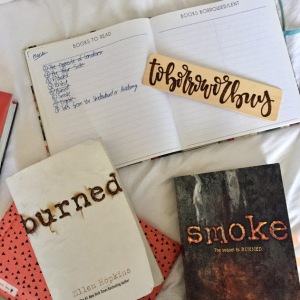 It all started with a dream. Just a typical fantasy, but for a girl raised in a religious—and abusive—family, a simple dream could be the first step toward eternal damnation. Now Pattyn Von Stratten has questions. Questions about God, and sex, and mostly love. Will she ever find it? Pattyn experiences the first stirrings of passion, but when her father catches her in a compromising position, events spiral out of control.

Pattyn is sent to live with an aunt in the wilds of rural Nevada to find salvation and redemption. What she finds instead is love and acceptance, and for the first time she feels worthy of both—until she realizes that her old demons will not let her go. Those demons lead Pattyn down a path to hell—not to the place she learned about in sacrament meetings, but to an existence every bit as horrifying.

In this gripping and masterful novel told in verse, Ellen Hopkins embarks on an emotional journey that ebbs and flows. From the highs of true love to the lows of loss and despair, Pattyn’s story is utterly compelling. You won’t want this story to end—but when it does, you can find out what’s next for Pattyn in the sequel, Smoke.

The first time I read Burned I was in high school and I remember loving it even though it broke my heart. Therefore when I heard there was a sequel I knew I had to read it but since I read Burned so long ago I knew I’d have to do a reread and I’m so glad I did.

The novel follows protagonist Pattyn who grew up in a Mormon family where it was believed that women were only there to provide children and their husband would have to pull them into heaven when the time came. Pattyn’s father was abusive and as Pattyn began to question her religion more and more she also began to act out. Her parents decide to send her to live with her aunt, and it may have been the best thing they ever did for her.

Out there she began to realize there was a different way to live and that there’s more to life than what she had been taught. However, don’t expect this story to have a happy ending. As Pattyn foreshadows often, her sense of freedom doesn’t last forever.

Even though I knew how this novel would end it still broke my heart again. While I love this book I hate how it ends, mainly because I want so much more for Pattyn. I’m currently reading Smoke now, which I like a lot, but I refuse to get my hopes up for Pattyn to have a happy ending. Ellen Hopkins has broken my heart too many times for that.

Overall, I thought this was a great read, even the second time around. If you haven’t read it yet definitely check out it. Just be prepared to cry. Also, while this is one portrayal of Mormon life this isn’t the case for all Mormons so don’t take it as such.

If you have read Burned let me know your thoughts on it below.

“Live your life right. Love with all your heart. Don’t hurt others, and help those in need. That is all you need to know.”

Writing From the Tub