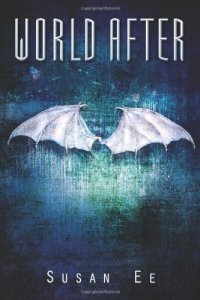 In this sequel to the bestselling fantasy thriller, Angelfall, the survivors of the angel apocalypse begin to scrape back together what’s left of the modern world. When a group of people capture Penryn’s sister Paige, thinking she’s a monster, the situation ends in a massacre. Paige disappears. Humans are terrified. Mom is heartbroken.

Penryn drives through the streets of San Francisco looking for Paige. Why are the streets so empty? Where is everybody? Her search leads her into the heart of the angels’ secret plans, where she catches a glimpse of their motivations, and learns the horrifying extent to which the angels are willing to go.

Meanwhile, Raffe hunts for his wings. Without them, he can’t rejoin the angels, can’t take his rightful place as one of their leaders. When faced with recapturing his wings or helping Penryn survive, which will he choose?

*Warning this review will contain spoilers for Angelfall. Read at your own risk*

I finished this book in a day. A legit day. I was hooked. I’m pretty sure I sped read just because I needed to see more of Raffe and Penryn. I was disappointed to find, however, that their first scene together didn’t come until I was at 72% in the book. Even so, I really liked this book.

Not as action packed as Angelfall, World After begins right where we left off with Penryn scaring everyone by “waking from the dead”. The lack of action was made up for with the increase of knowledge. In this novel we learn more about the politics of the angels, what exactly it is Uriel, the Politician, is up to, and why Raffe is so damn afraid to admit his feelings for Penryn.

This novel also delved into Raffe’s past a bit with the help of his handy, dandy sword, Pooky Bear. Although there wasn’t a lot there was still definitely enough action to keep me entertained and glued to this book. Moreover, Susan Ee, refuses to shy away from gruesome and violent scenes, and just goes for it, which I actually liked.

What I also liked about this book was seeing more of Penryn’s mom and Paige. It was nice to see their family dynamic instead of just hearing about how it used to be. Additionally, although Penryn’s mom is still definitely crazy, I came to respect her more in this novel.

Overall, I kept reading for the Raffe and Penryn scenes but I enjoyed the novel for it’s high stake drama and fight scenes. Definitely need to read the next book as soon as possible. I need to know what happens next!

I look up to say something but [Raffe] puts his finger to my lips and whispers, ‘Don’t talk. You’ll just spoil my fantasy of rescuing an innocent damsel in distress as soon as you open your mouth.’

Borrow or Buy: Buy!! I’ve already reread some scenes because I’m still not over how good it is.

There were books involved …

4 thoughts on “Book Review: World After”