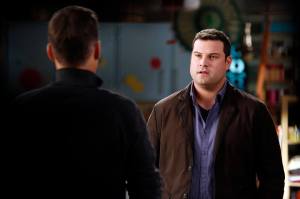 This episode was very emotional and I loved every minute of it.

First, let’s begin with Tank finding out the truth behind Bay breaking up with him. Silly John had no idea he was reprimanding the wrong guy and poor Tank had to awkwardly find out his girlfriend cheated on him via her father. I felt so bad for Tank and all I wanted to do was run and give him a hug.

However, I’m glad the truth is out now and Bay can official move on to Emmett. Bemmett is back y’all! Well, for now anyway. Moving on.

Switched at Birth was actually able to surprise me this episode which is rare. Turns out Matthew wasn’t just pretending to be Mandy to get back at Emmett. Instead it actually went much deeper and the truth is he’s gay and has been crushing on Emmett for a while. Go figure.

I actually ended up feeling bad for Matthew as well because although what he did was still very messed up he’s also dealing with some really heavy stuff. I can’t even imagine what it’s like to have to hide such a big part of who you are. To then have people find out that you pretended to be a girl just so you could fake date some guy is even crazier and embarrassing.

Due to these circumstances Bay is able to convince Emmett not to tell the principal the truth about what happened with Matthew even though they were able to delete all the pictures and texts Matthew had. Instead Emmett reconciles with Matthew telling him that he’s going to let go and it’s all over. Not sure if they’ll ever be friends again (probably not) but at least there’s no drama and I’m sure Emmett has now learned his lesson about the dangers of sexting (although I still don’t get what he could’ve sent Matthew if it wasn’t a pic of his “junk” but I’ll leave it alone).

As per usual Daphne has gone through yet another boyfriend in less then a season (shocker!). To be fair it’s not Daphne’s fault that she has a line of boys at her peck and call and then once she picks one they up and leave. Or is it? Hmmm . . .

Either way once Daphne got the assistant job at the clinic and got a little bossy with Campbell he couldn’t handle and took her advice and applied for a higher position . . . at another clinic. Awkward. He then says that he doesn’t think he’ll be able to split his time at this new clinic and make time for her. Really Campbell? You can’t drive you car back to see your girlfriend every once in a while? You’ll be that busy? Okay, sure. More like you can’t handle the fact that Daphne’s moving up in the world. I never liked that guy (Jorge forever!). Anyway Campbell’s now out and God only knows who’ll be in next.

Kathryn is making great strides with her book or at least she was until Sarah Lazar decided to sue because Kathryn created a character based on her and the character is a slutty reporter who sleeps around. Ouch. As much as I get why Kathryn did it (I’m definitely not a Sarah Lazar fan) slut shamming is never okay. After having Regina talk some sense into her Kathryn makes a small effort to have the Sarah Lazar type character changed but to no avail. So with a deep sigh Kathryn leaves her book the way it is and it seems that will cause more problems later down the road but that’s a problem for next week’s episode.

Lastly, now that Angelo has moved in the Vasquez’s are a cute little happy family. Until Wes shows up. Neither Angelo nor Daphne are big fans of his, especially when he reveals he’s carrying a gun (Daphne wasn’t there for that but I know she wouldn’t be too happy about that). Although Regina is at first against the idea of using a gun as protection her paranoia and fear gets the best of her leading her to ask Wes to teach her how to shoot. Truthfully I think Regina has a right to be a little scared but I don’t think getting a gun is going to help the situation. I just hope no one gets shot. Let us pray.

It looks like next week is going to be a little less crazy but still filled with drama. Emmett might be moving (but probably not) and Kathryn confronts Sarah Lazar about a possible affair with John. Also Regina will once again question Daphne’s allegiance to the Vasquez family. Oh dear. Check out the promo below.

Source for photos/GIFs: ABCFamily and Tumblr