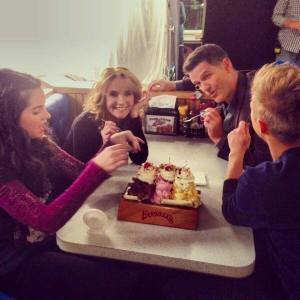 Last night, Switched at Birth had a lot of drama, dealing with some tough issues. As always there will be spoilers; you’ve been warned.

First, Daphne tries to help Sharee deal with her mom who is clearly struggling with her mental health. Daphne is finally able to convince Daphne to take her mother to see a psychologist at the clinic but they get her there under false pretenses, telling her that Sharee needs a flu shot.

Of course, Daphne and Sharee’s plan doesn’t go smoothly as the psychologist is late and Sharee’s mom quickly realizes what she’s really there for and storms out taking Sharee with her. It’s not until Daphne goes into the room to check on the doctor that she realizes that Sharee’s mom didn’t just leave but stabbed the doctor on the way out. This leaves Daphne in a difficult situation as she has to puncture a needle into the doctor’s chest to help him breath and survive.

Working through her fear Daphne is able to save the day. Sharee’s mom is of course arrested and though Daphne would love to take Sharee in, Regina let’s her know it’s not possible. Even so, Sharee’s great-aunt is coming to stay with her as they work everything out. Hopefully everything works out for Sharee and her mom will now get the help she needs.

Last night, we finally got to see some characters that were missing from the show last week. Emmett and Travis have interviews for Galludet but Travis misses his, and tells Melody it was because he was helping Mary Beth with her car so she could get to work on time (lies!). Melody quickly learns the truth at dinner when Mary Beth admits she works on campus, only a few blocks from her dorm. This leads to a fight between Melody and Travis in which Travis tells Melody she’s not his mom. Ouch!

However, later, Mary Beth makes a good point to Melody, reminding her that Travis has never lived in a household with people who love him and understand him and he probably doesn’t feel ready to leave that nest just yet. This leads Melody to tell Travis that she will help him every step of the way while he applies to and goes to school and that even when he goes away he’ll still have a home to come back to. Awwww!

Also, Melody was getting her flirt on with her ex-husband’s audiologist, Gabe, who by the end of the episode she makes plans to go on a date with. You go Melody. Get it girl!

The Kennish’s are still having their issues. Though Kathryn kicked John out of the house, he somehow still believes that she’s “overreacting” and just needs to accept their apology and move on. Silly John!

Meanwhile he’s still living in Toby’s apartment, driving Toby crazy with his messiness. Kathryn, on the other hand, is making head way on her book and doesn’t seem particularly inclined to let John back in the house anytime soon (and rightly so).

The fear of their parent’s impending divorce (maybe?) leads Bay and Toby to think of a plan to get them back together. Using trickery and lies they’re able to get Kathryn and John to an old restaurant they all used to go to as a family.

As could be expected this plan did not turn out the way the kids expected and instead leads to a fight between Kathryn and John in which Kathryn asks if they even have anything in common anymore. It’s then that she realizes she’s changed and she’s not happy with the life they’ve made for themselves anymore.

Yeah that was a serious realization for Kathryn to make and I’m glad she finally said what she was feeling. While they’re dealing with their issues Bay’s hand starts acting up and they have to take her to the doctor where it’s revealed that there’s ripped tendons in her hand and she’s going to need surgery. The doctor doesn’t guarantee that she’ll be able to do art ever again. Poor Bay.

Here’s to hoping it works out for her.

Lastly, Regina and Wes are starting their East River side project, and they have a town hall meeting where, Regina’s mom, Adriana, shows up and raises some serious questions about what this development is going to mean for East River side residents. Wes doesn’t approve of this and tells Regina to get her mother under control (say what?). Regina actually does it but Adriana accuses Wes of using her for “the color of her skin”.

After Regina thinks about this she asks Wes if this is true and he admits that it is beneficial that she’s a Latina but claims that’s not why he originally hired her. Regina says she’s going to quit but Wes makes it clear that it’ll cost her a lot to get of their contract, basically challenging her to do so. In conclusion, Wes is evil but I think we all knew that from the start.

Next week’s episode looks like it’ll have a lot less drama and instead a whole lot of dancing. Also, it looks as if this episode will have some Bank and Bemmett in it. Sounds like there’s another love triangle in the works (but let’s face it we all knew that was going to happen).

I’m excited to see exactly what this episode will entail and can’t wait to see everyone’s dancing skills (or lack thereof). Check out the preview below and let me know your thoughts.

Photos and Gifs from ABCFamily and Tumblr