Black women are truly a group of amazing people to behold. From Beyonce to Kerry Washington to Oprah Winfrey these women are doing amazing things and looking good while doing it. This Black HERstory Month let’s praise all the black women who are doing great things today.

Known as the “Queen of Media” Oprah Winfrey has greatly changed the face of media. Starting with her own talk show on ABC she now owns her own network (called OWN of course). She is currently the only black billionaire in North America. Talk about doing big things.

Besides having the ability to release an album in the dead of night without any promotions and still making it to #1 on the Billboard Music Charts and iTunes, Beyonce is one of the greatest female powerhouses of all time. Earning herself a total of 17 Grammys both on her own and with Destiny’s Child, she is the third most honored female vocal artist. Outside of her musical accomplishments Beyonce has turned herself into a very successful brand with deals with Pepsi and H&M, her clothing line with her mom, and the start of her own fragrance line. Get it girl! 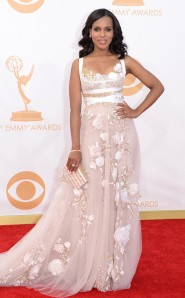 Many people forget that Kerry Washington starred in Save the Last Dance but she was there. Washington has been acting for a longtime now but it wasn’t until recently that she’s been recognized as the phenomenal actress she is. As Olivia Pope on the ABC show, Scandal, she has become very well known worldwide. Washington is not only a great actress but also a philanthropist supporting Woman’s Cancer Programs and V-Day, a global group that promotes awareness of violence against woman and girls. Amazing!

Leaving the 2012 London Olympics with two gold medals (one for team and one for the all-around in gymnastics) Gabby Douglas practically became famous overnight. Douglas is also the first African-American to win the all-around gold in gymnastics at the Olympics. Lifetime recently released a biopic about the young Olympian where we get an inside look on who Douglas really is the struggles she and her family faced to get to where she is. Now preparing for her next Olympics Douglas is in full training mode. Good luck in 2016!

Speaking of the Olympics, Allyson Felix was also a star at the last one. Leaving with one gold and two silver medals she dominated the track. She is also a four-time recipient of the Jesse Owens Award from USA Track and Field that signifies the athlete of the year. She is the only woman to win the award four times. She is also training for the 2016 Olympics. Go girl!

Saturday Night Live is probably the most well known variety show on TV right now and yet for six long years they lacked any representation of a black woman on their show. Hence, they held a a national showcase to look for a new black actress to come onto their show and they found one: Sasheer Zamata. She is the first black actress on the show since Maya Rudolph left in 2007. Zamata has been included in many sketches on the show since introduction onto the show including being a part of their Black History Month skit which was phenomenal. I can’t wait to see where Zamata goes from here on the show and here’s to hoping SNL adds more color to their show in the future.

Most well known now for her poetry on feminism in Beyonce’s song, “Flawless”, this Nigerian writer is in all senses of the word “flawless”. Receiving over 10 awards for her writing she also does multiple talks (including TED talks and talks with the Commonwealth League) worldwide. Her latest book, Americanah, was selected by the New York Times as one of The 10 Best Books of 2013. In summary, she’s a writing phenomenon that we’ll certainly be hearing more from.

At the age of nine, Quvenzhané Wallis became the youngest nominee for Best Actress in a Leading Role in Academy Awards history for her role in Beasts of the Southern Wild. Though she didn’t win the Oscar Wallis won 13 awards for her role in the film. Wallis will be playing Annie in the upcoming remake of the film/musical. She’s so young and doing such amazing things that I feel a little ashamed. Dang!

Black women are getting more screen time on TVs these days and it’s fantastic. Nicole Beharie stars on the new FOX, sci-fi drama, Sleepy Hollow. Beharie plays a Lieutenant  who is the sheriff-detective in her small town and she is the Second Witness of the Four Horsemen of the Apocalypse. I’m not entirely sure what that means but I think she plays a BAMF. Awesome!

Most well known for her role in 12 Years a Slave, Lupita Nyong’o is a Kenyan-Mexican actress and film director. So far she has won 29 awards for her role in the film and has been nominated for an Oscar. In a world where sometimes dark skin is seen as a negative, it’s wonderful to see a beautiful black woman proving everyone wrong. Keep doing you girl!