There were so many great things that occurred at the Golden Globes last night I’m not even sure I’ll be able to cover it all but I’m going to try.

Tina Fey and Amy Poehler are great especially when they’re together. It’s no surprise that they were asked to host again for the second year in a row. Their opening monologue was fantastic. They cracked jokes on not only the many actors in the audience but also on themselves. I especially enjoyed their Scandal moment when they talked about Kerry Washington being pregnant and when Poehler blamed Netflix for the future of TV becoming dramas made by SnapChat. These two ladies kept the jokes rolling throughout the show and I think they did a great job.

I think we can all agree that Diddy was on something last night (some are suggesting he brought his own Ciroc). Whatever it was it made him act a little strangely. From stepping in Usher’s spot when they were presenting to awkwardly trying to hug Bono, Diddy was all over the place. However, I thought it was hilarious so I think it was fine.

Their was a lot of talent at the Globes last night and I think everyone’s awards were well deserved. Of course I was rooting for Kerry Washington to finally win an award for her role as Olivia Pope but sadly she did not. However, I love Robin Wright on House of Cards so I wasn’t too mad about it. Other notable wins were American Hustle which received four awards in total (I still need to see that movie!), Frozen for best animated feature, 12 Years a Slave for best drama motion picture, Leonardo DiCaprio for his role in The Wolf of Wall Street (still not an Oscar but maybe one day Leo), and both Breaking Bad and Brooklyn Nine-Nine left with two awards.

Almost everyone looked fantastic last night. Many people did not like Jennifer Lawerence’s dress but I liked it. Then again maybe I’m biased because I love her but I thought she looked cute and I love her haircut. 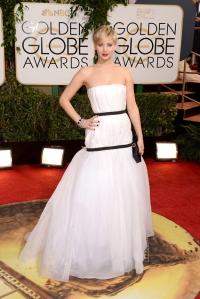 One of my all time favorites was Sofia Vegara. As always she looked flawless. Her dress accentuated all her curves in the right way and I just couldn’t take it. Also, her Modern Family co-star, Sarah Hyland was also killing it on the red carpet. Other notable ladies were Taylor Swift, Dianne Keaton, Kaley Cuoco, Sosie Bacon (the Ms. Golden Globe), Krya Sedgewick, and Reese Witherspoon. They were all working it and I wish I could afford their fashion. 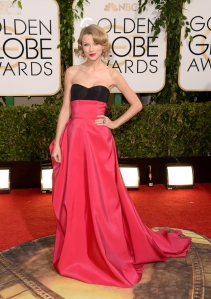 All and all, I thought the show was great and I wouldn’t mind if Fey and Poehler hosted again. I’ll be crossing my fingers and my toes in hopes that dream comes true. Now onto the next award show. When’s the Oscars again?