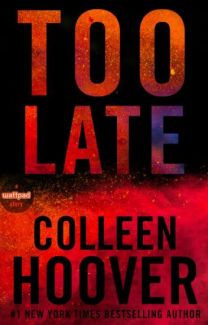 Sloan will go through hell and back for those she loves. And she does, every single day. After finding herself stuck in a relationship with the dangerous and morally corrupt Asa Jackson, Sloan will do whatever it takes to get by until she’s able to get out. Nothing will get in her way. Nothing except Carter.

Sloan is the best thing to ever happen to Asa. And if you ask Asa, he’d say he’s the best thing that’s ever happened to Sloan. And he has no plans of letting her go; even if she doesn’t approve of his sinister lifestyle. But despite Sloan’s disapproval, Asa knows what it takes to keep what he wants, and he’ll do it. He knows what he needs to do to remain on top, and he does it. Nothing will get in his way. Nothing except Carter.

As some of you know I’ve recently taken a swan dive into Colleen Hoover’s books. Recently she uploaded a story to Wattpad, a website that offers free books, and thankfully by the time I caught wind of it she was almost done writing it because I don’t think I could’ve waited while she posted chapter by chapter.

Too Late is a bit different than Queen CoHo’s other novels. For one thing it’s told in three alternating POVs instead of her usual two. Additionally, this story is way more explicit and comes with a “Mature Audiences Only” warning. As soon as the novel begins you can see why it’s explicit. There’s sex and a lot of violence, and CoHo just goes full steam ahead with this story.

Right from the beginning I was pulled into the drama that is Sloan’s life. Her boyfriend, Asa, is a hot mess in every sense. He’s abusive,  crazy, and a drug dealer. Carter on the other hand, is everything you would expect from a CoHo love interest. He’s protective, caring, and kind of funny. If you’ve read Confess I’d say Too Late is kind of similar but with the volume turned all the way up.

Sloan’s situation is much more dire than Auburn’s in Confess, and what’s cool about Too Late is we do get Asa’s POV, which is enlightening but not enough for me to feel sympathetic towards him. He’s still a total and complete jerk but at least as the novel goes on we kind of understand why. Asa’s actions are still inexcusable but at least they’re explanatory. Honestly, I’m not sure which character I dislike more: Asa or Trey from Confess.

As with most of CoHo’s novels, the love story completely pulled me in. Sloan and Carter have instant chemistry and their conversations and playful manner with each other made me swoon.

Too Late was the perfect combination of suspense, drama, and romance that made me hooked. I think I read this book in about a day and I’m so glad it was my first Wattpad book. Obviously, CoHo is a bestselling author so I know not every Wattpad story will be like this, but at least this has opened me up to giving Wattpad books a chance.

Definitely give Too Late a read if you want to try out some of CoHo’s writing before reading her published work. It’s totally free (Edit: This book is no longer on Wattpad. You can now purchase it on Amazon) and although it’s not exactly like her published works I think it’ll be enough to help you decide if CoHo’s writing is for you. Although, really you should just read her books. They’re amazing!

Borrow or Buy: Since this is a Wattpad book this question actually doesn’t apply. But if you could buy Too Late I would highly recommend doing so. (Edit: Definitely a borrow.)

“My mouth finds hers again and I kiss her the way she deserves to be kissed. With conviction. With respect. With feeling.”