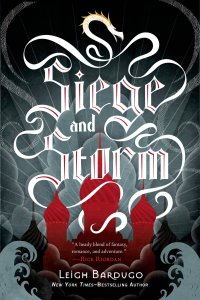 Hunted across the True Sea, haunted by the lives she took on the Fold, Alina must try to make a life with Mal in an unfamiliar land, all while keeping her identity as the Sun Summoner a secret. But she can’t outrun her past or her destiny for long.

The Darkling has emerged from the Shadow Fold with a terrifying new power and a dangerous plan that will test the very boundaries of the natural world. With the help of a notorious privateer, Alina returns to the country she abandoned, determined to fight the forces gathering against Ravka. But as her power grows, Alina slips deeper into the Darkling’s game of forbidden magic, and farther away from Mal. Somehow, she will have to choose between her country, her power, and the love she always thought would guide her–or risk losing everything to the oncoming storm.

*Warning: There will be minimal spoilers about Shadow and Bone in this review. Read at your own risk.*

So I’m still not a big fan of Mal and then Leigh Bardugo had the nerve to give me Sturmhound, another possible love interest for Alina who, again, I liked more than Mal. Thanks Bardugo! No but seriously thank you; Sturmhound is my new fave. He’s cute and snarky, my favorite combination. Also known as the “too clever fox,” Sturmhound brought an extra round of humor to this novel that I felt was sorely needed. We also got some other new characters in this novel including the twins, Tamar and Tolya, who are an awesome addition to the trilogy. Their background is very interesting and they’re both so fierce and bad ass.

I believe my biggest issue with this novel was how quickly the Darkling came back into play. There was no build up or anything, we just kind of dived right back into the Darkling versus Alina saga. As much as I love the Darkling I wanted more from his and Alina’s reunion. It just seemed a little anticlimactic to me. Once I got past that though I definitely liked this book more than Shadow and Bone. I still didn’t love it but it was definitely better, which is a good sign about where this series is heading.

Still, this is definitely a borrow for me. I can’t really see myself reading this book again, no matter how swoonworthy Sturmhound is. Did I mention he’s the best part of this book? Because he is.

Have you read the Grisha trilogy? Let me know your thoughts about it below!

“I want to kiss you. But I won’t. Not until you’re thinking of me instead of trying to forget him.”