For my Man Crush Mondays and Woman Crush Wednesdays I try to make them more diverse because I honestly hate the lack of color on my blog, especially since I, myself, am a person of color.

That being said it’s difficult to find characters that are in fact POCs. I’ve recognized this problem in literature before but it becomes abundantly clear when you’re actively look for people of color in your favorite books and can’t find them.

When i first realized this problem my first thought was, “I need to read more diverse books.” Now, this is a fair thought and in the future I will make more of an effort to diversify my reading. But then I had another thought: “Maybe there just needs to be more diverse books.”

I’m not writing this blog post with any stats to back my claims but just on my own general experience the lack of diversity in books, fiction specifically, is sub par at best. And the books that do have a POC they’re almost never the main character. Instead they’re the secondary character. They’re the best friend, the enemy, occasionally the love interest, and sometimes just someone whose name appears once as if to complete some diversity requirement.

As someone who mainly reads young adult fiction I find this lack of color disappointing at best, a serious problem at worst.

From Tumblr: #WeNeedDiverseBooks because I grew up thinking brown men couldn’t be anything more than a sidekick pic.twitter.com/UrPMBcxjo4

Why is it so hard for me to find a teen book that has a person of color as the main character? And why is it when I do it’s not in the “Teen Fiction” section but instead in “African-American Literature,” or “Asian American Novels,” or “Hispanic Books”? Why is it that as soon as it’s written by an author that not’s white it can’t be classified as just a book but as something specialized that needs it’s own section and should be segregated from other books?

If I write a book about a girl dying with cancer who falls with a boy who also has cancer will it be put in a different section than The Fault In Our Stars just because I’m black? And one could argue that it’s good we have our own section. That it makes our books stand out but it shouldn’t be that way because by separating books like that it inherently makes readers think that “those books” are something different. Something foreign. Something not to be read by someone other than of that race.

Therefore when we do have diverse books it’s hard for them to get the same acclaim and sell as many books as books with white protagonists because only people of color are reading books by people of color and that’s just wrong.

This being said I encourage you all to diversify your reading. Read outside of your comfort zone and show your support for more diverse books by tweeting your thoughts on the subject with the hashtag #WeNeedDiverseBooks. There’s also a Tumblr page dedicated to the cause and it’s not only about color/race but also about getting more books that discuss disabilities and the LGBTQ community as well. It’s a great movement and you should be a part of it. 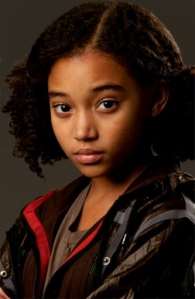 I’ve been feeling like my WCW’s have been lacking color. Therefore this Woman Crush Wednesday I’d like to shout out Rue, from The Hunger Games. Although I’m sure you can still find people who will debate whether or not she’s Black, the truth is she is indeed a POC and everyone just needs to accept that.

If you haven’t read/seen The Hunger Gamesset, I’d advise you do that first before reading this post. There will be spoilers!

Moving on, what makes Rue fantastic isn’t just that she’s a POC. She’s incredibly courageous for a young girl thrown into a battle to the death. Rather than just give up she learns how to hide in trees and protect herself. Additionally, she becomes a great ally to Katniss, helping Katniss get out of a very sticky situation by showing Katniss a nest of tracker jackers to use against the Careers.

Rue is also fiercely loyal. She stands by Katniss’ side to the very bitter end and does everything she can to help keep Katniss alive. I won’t go into how the POC’s in The Hunger Games were really just tools to help promote the survival of the main, white protagonists. That could be another blog post in it of itself.

What I will say is Rue was a cute, young girl, who may not have been fearless but definitely didn’t just cower in the background. When push came to shove Rue was willing to do what it took to strike the Careers back and make them suffer in the games. Rest in paradise, Rue.

But I feel as if I did know Rue, and she’ll always be with me. Everything beautiful brings her to mind. I see her in the yellow flowers that grow in the Meadow by my house. I see her in the Mockingjays that sing in the trees. But most of all, I see her in my sister, Prim. – Catching Fire