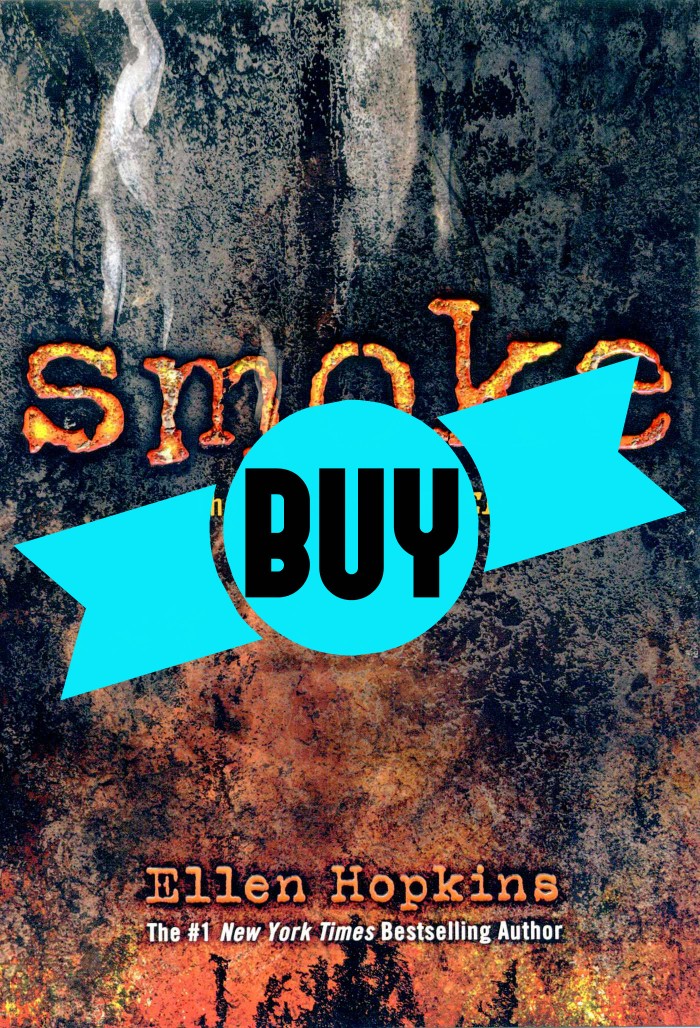 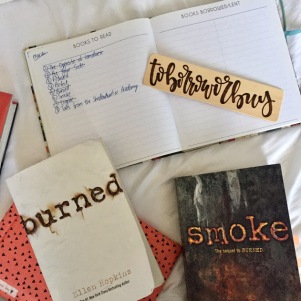 Pattyn Von Stratten’s father is dead, and Pattyn is on the run. After far too many years of abuse at the hands of her father, and after the tragic loss of her beloved Ethan and their unborn child, Pattyn is desperate for peace. Only her sister Jackie knows what happened that fatal night, but she is stuck at home with their mother, who clings to normalcy by allowing the truth to be covered up by their domineering community leaders. Her father might be finally gone, but without Pattyn, Jackie is desperately isolated.

Alone and in disguise, Pattyn starts a new life as a migrant worker on a California ranch. But is it even possible to rebuild a life when everything you’ve known has burned to ash and lies seem far safer than the truth?

Bestselling author Ellen Hopkins continues the riveting story of Pattyn Von Stratten she began in Burned to explore what it takes to rise from the ashes, put ghosts to rest, and step into a future.

*Warning: There will be spoilers from Burned by Ellen Hopkins. Read at your own risk!*

After reading Burned, I had very low expectations for Smoke. Not that I expected Smoke to be bad, just that I didn’t want to get my hopes high that Pattyn would actually get a happy ending. That just didn’t seem like Hopkins style. That being said, I was surprisingly satisfied with how this book ended and I’m so glad she gave us a sequel to Burned because I needed that closure.

Smoke is actually told in alternating POVs of Pattyn and her younger sister Jackie. The novel begins with Pattyn on the run after the death of her father and Jackie dealing with the repercussions (or lack there of) of what happened prior to her father’s death. Both Pattyn and Jackie’s stories are heartbreaking to say the least. They’ve gone through a lot, beginning with their father’s physical abuse and then dealing with death and in Jackie’s case rape (this happens at the start of the novel so you’re not being spoiled).

I truly liked nothing about Pattyn and Jackie’s mother. I wanted to be sympathetic because her husband was abusive but I believe there’s a difference between being a victim of abuse and than using that as an excuse for not taking care of your kids. Especially in the case of Jackie, her mother was not there for her at all and it was painful to read just how much her mother threw Jackie under the bus in order to satisfy her own needs.

It was also painful to see Pattyn continue to mourn the deaths of Ethan and her unborn child. Going on the run while dealing with that pain and then the confusing feelings about her father’s death was hard to read.

As always though, Hopkins writing was beautiful poetic and even the parts that made me cry sounded beautiful. I love Hopkins writing style and loved it even more in this novel. She handled so many issues in this novel, including hate crimes, with such sensitivity that you know this book was written with care.

Also liked the introduction of new characters like Adriana, Angel, and Gavin. I won’t say where they come in because that would spoil it but I thought they were all great for the Von Stratten sisters and I’m glad Pattyn and Jackie had them, as well as Aunt J, Kevin, and another family member that made a surprise appearance.

Though I’ll probably never read this book again because it was incredibly dark, despite the beautiful ending, I still think you should buy it just because I now what to share with everyone. Go read this book if you haven’t already.

“Hell is alive in hearts emptied of love.” 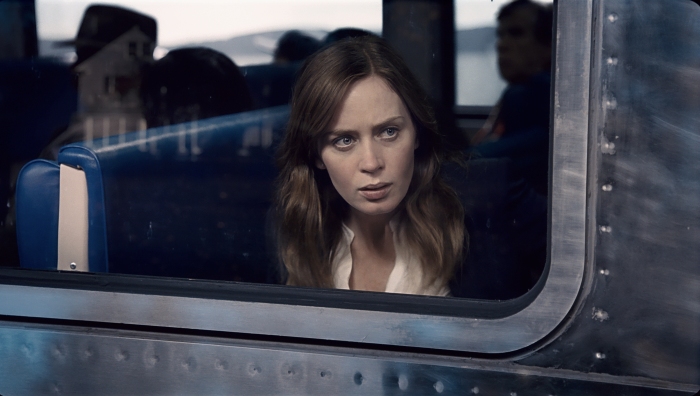 *Note: There will be spoilers about the book and movie in this review. Read at your own risk*

I went into this film with low expectations because the reviews weren’t great and on average the movie is almost never as good as the book anyway. That being said I didn’t hate The Girl on the Train movie but I definitely didn’t love it either. Here’s my full assessment.

First of all, my biggest issue with this film was for some reason the setting was moved from London to New York City. This made no sense to me, especially because Emily Blunt, who plays Rachel, is British. Why change the setting when your main actress is already British? I don’t understand. Besides that the plot pretty much stayed the same. It’s hard to change the plot too drastically of a mystery. There were still changes of course but nothing too major.

Rachel for some reason draws now, which was never in the books. She’s actually a pretty good artist in the film. I don’t know why they felt the need to add this characteristic to Rachel but they did and it seemed like a pointless addition to me. There was also the addition of Martha, the wife of Tom’s former boss. I’m not sure if she was even in the book but she was given a big role in the film because she’s the one that makes Rachel realize everything Tom told her she did while she was drunk was a lie. In the books it was actually Dr. Kamal, the psychologist, that helped Rachel reach this realization.

Speaking of Dr. Kamal, in the film they kind of made it seem like Megan didn’t actually have an affair with him and in the books she did. Yes they ended it but it did very much happen. Still, I didn’t think skimming over this was that big of a deal. It didn’t change the plot that much so it was fine.

What bothered me the most, in terms of things being removed from the plot, was Scott and Rachel having sex. I thought it was so weird in the book and showed a lot about both Scott and Rachel’s character. Also, Scott was much scarier in the book than he was in the film. In the movie he kind of felt a little irrelevant to be honest. In the book I truly suspected Scott but in the movie he just didn’t seem all that bad. Yes he was a bit emotionally abusive in the movie but in the book he was more physically abusivee as well, which made things 10 times worse.

Similarly, although Tom was definitely still shown as the terrible person he is I didn’t like that we didn’t get to see how much Tom played Rachel and Anna. In the book Tom visited Rachel multiple times and even made it look like he regretted his decision to leave her and be with Anna. We got to see him make Rachel feel like he was still in love with her and if Anna wasn’t around they’d still be together. We don’t get that feeling in the movie. Instead it just looks like Tom is just as annoyed with Rachel’s antics as Anna is, which wasn’t the case. Tom enjoyed the attention he got from Rachel and took advantage of it and I felt like that was an important part of the story that you don’t get to see in the film.

I kind of went into this with Scott already but another character that was very different from their book version was Rachel’s roommate, Cathy. In the movie she is much nicer than she was in the book. Also, Cathy’s boyfriend doesn’t even exist in the movie, which, to be honest, is fine since he didn’t really have that big of a role in the book anyway. I was surprised by how nice Cathy was in the film and I kind of liked the change. I liked Cathy way more in the movie than in the book.

Another character that wasn’t included in the film was Rachel’s mom. On the one hand I don’t think Rachel’s mom was necessary for the film so I think her being absent is okay but in terms of how the book closes the money Rachel receives from her mother helps her move forward whereas in the film Rachel’s future is left a bit ambiguous. Again this isn’t necessarily a bad thing it’s just different.

Emily Blunt did an excellent job of playing Rachel. She was an unlikeable character in the book and remained that way in the film. The same can be said for  Haley Bennett who played Megan and Rebecca Ferguson who played Anna. Justin Theroux as Tom was perfect and just as crazy and scary as I imagined him to be.

I didn’t love this movie and the book was of course better. I’m not sure why but the way the book is formatted with the alternating point of views of Megan, Rachel, and Anna, seemed to work much better on page than on screen. The film did a pretty good job sticking to the book but I just don’t think it translated well on screen. Even if I hadn’t read the book I don’t think I would’ve liked this movie.