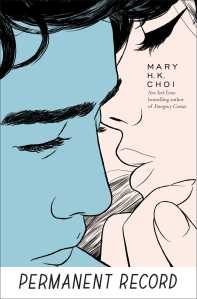 On paper, college dropout Pablo Rind doesn’t have a whole lot going for him. His graveyard shift at a twenty-four-hour deli in Brooklyn is a struggle. Plus, he’s up to his eyeballs in credit card debt. Never mind the state of his student loans.

Pop juggernaut Leanna Smart has enough social media followers to populate whole continents. The brand is unstoppable. She graduated from child stardom to become an international icon and her adult life is a queasy blur of private planes, step-and-repeats, aspirational hotel rooms, and strangers screaming for her just to notice them.

When Leanna and Pablo meet at 5:00 a.m. at the bodega in the dead of winter it’s absurd to think they’d be A Thing. But as they discover who they are, who they want to be, and how to defy the deafening expectations of everyone else, Lee and Pab turn to each other. Which, of course, is when things get properly complicated.

*I received a free advanced reader’s copy of this book from Simon & Schuster Books for Young Readers. This did not influence my review of this book in anyway. This is an honest review of the novel as I saw it. This novel will be released on September 3, 2019.*

It’s been a long time since I’ve read a novel that felt like the New York City I know and love. I think a lot of books about NYC are centered around the rich areas and the Upper East Side but the world in which Pablo exists in is the one I know. The New York that makes you forget you live in a big city because you’re running into the same people in your neighborhood all the time. The city where you have to struggle sometimes and shake your head at how expensive everything is but know you’ll never leave.

The city where your homies are and you’re all struggling to make it, doing your side hustle along with your day job. That’s the city I know and Mary H. K. Choi displayed it perfectly. I’d love to listen to the audiobook when it comes out because I could practically hear the conversations in my head as I read. The slang was perfect and not forced. I felt like I was hanging out with my cousins and friends, not reading about fictional characters.

Similarly, Choi did a great of showing Pablo’s vision of the world in stark contrast to Leanna Smart, the pop star he falls for. Choi didn’t write some kind of epic romance between a boy in debt and the pop princess who rescues him with her money. She wrote a story that felt real. Pablo’s disassociation from his problems and growing debt was just as real as Leanna’s feelings about her lack of freedom and being trapped in what was very much a privileged life.

Nothing about this story felt forced or unrealistic, which is why I loved it so much. Choi gave us a love story while also keeping Pablo at the center because ultimately this was his story. This was about his mental health struggles and him carving out a future for himself with the help of his family and friends. Pablo was so relatable and it was great reading a story about a young adult who failed his own expectations for himself. I don’t think I’ve ever read a novel that looks so closely at the difficulty many students face when weighing attending their “dream school” that they think will determine their future against the actual cost of that dream.

Choi handles so many different topics in this novel, just like she did in Emergency Contact, and she handled them with the same level of care and nuance that made me love her debut. I can’t wait for everyone to read this book because there is so much to talk about. This is definitely one I can see myself rereading and getting something new out of it every time.