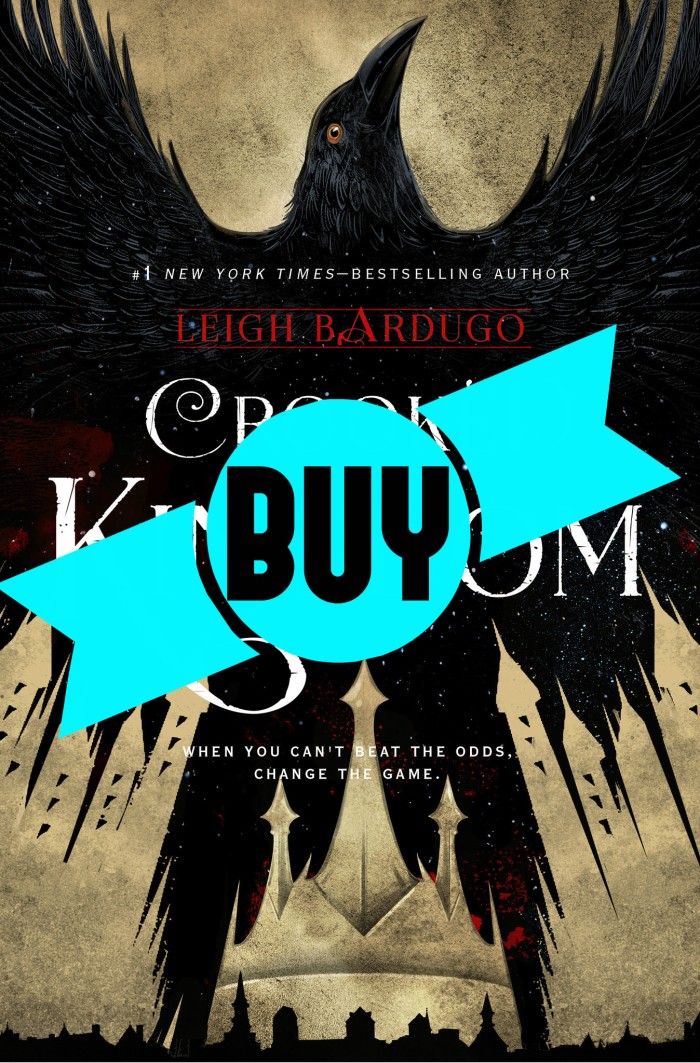 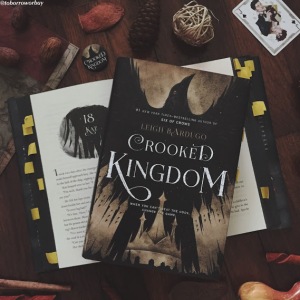 Kaz Brekker and his crew have just pulled off a heist so daring even they didn’t think they’d survive. But instead of divvying up a fat reward, they’re right back to fighting for their lives. Double-crossed and badly weakened, the crew is low on resources, allies, and hope. As powerful forces from around the world descend on Ketterdam to root out the secrets of the dangerous drug known as jurda parem, old rivals and new enemies emerge to challenge Kaz’s cunning and test the team’s fragile loyalties. A war will be waged on the city’s dark and twisting streets―a battle for revenge and redemption that will decide the fate of the Grisha world.

*Warning: There will be minimal spoilers about Six of Crows in this review. Read at your own risk.*

I went to the NYC launch for Crooked Kingdom so I got the book a day early, which was awesome. As soon as I got it I dived in and loved it immediately. Crooked Kingdom begins pretty soon after the end of Six of Crows and the main mission is obviously to save Inej from Van Eck, which of course is easier said than done but if anyone can do it it’s the Dregs. Right? Naturally Kaz has a plan up his sleeve but what I really liked about this book and Six of Crows is Bardugo doesn’t just tell us what it is, she just let’s it unfold in front of us. Also, if you were hoping this book would begin in Kaz’s point of view, with him being totally distraught over Inej’s kidnapping then you don’t know Kaz or Bardugo. We don’t even get to Kaz’s point of view until part two, which let me tell you, almost killed me. But it’s worth the wait.

I won’t go into the plot because I promised no spoilers but I will say Bardugo wove this story together perfectly. I was excited, nervous, proud, a little sad, and swooning. There are so many swoon worthy moments in this one but still not so many that it was overkill and seemed out of character for the Dregs. Everyone was still their typical selfs and though it was frustrating at times (I’m looking at you Kaz) I’m glad that Bardugo made us work for the swooning because in the end it was worth it.

My favorite part about this novel was we learned so much about everyone’s pasts, particularly Inej, Jesper, and Wylan. We really got to know the Dregs in this novel and that was awesome. I think Six of Crows was really about establishing the team but Crooked Kingdom is about really getting to know them and what brought them to where they are now. I also thoroughly appreciated the throwbacks to the Grisha trilogy that appeared in this novel as well as the little Hamilton references.

The dialogue was great and I loved how the Dregs all interacted with each other and play off each other. There friendship is simple but it’s filled with love and trust. As with Six of Crows, Kaz’s schemes always surprised me, which made this novel really fun. The writing was superb and I couldn’t skim because every word was worth something. Overall, I loved this novel and I stayed up until 4 a.m. reading it because I just couldn’t put it down. It’s now filled with post its because I found something to love on almost every single page of this book.

Even though this is the lsat book in this duology I desperately need more of this world. In particular there’s one of the Dregs that I’d love to see more of but I won’t say who because I promised no spoilers. So I’ll leave you with this: read this book! It’s so good and I’ve been resisting the urge to pick it up and read it all over again. This is definitely a contender for my favorite book this year and that’s saying something because I love A Court of Mist and Fury with all my heart. But Crooked Kingdom is amazing. Definitely give it a read immediately!

“I would come for you. And if I couldn’t walk, I’d crawl to you, and no matter how broken we were, we’d fight our way out together—knives drawn, pistols blazing. Because that’s what we do. We never stop fighting.” 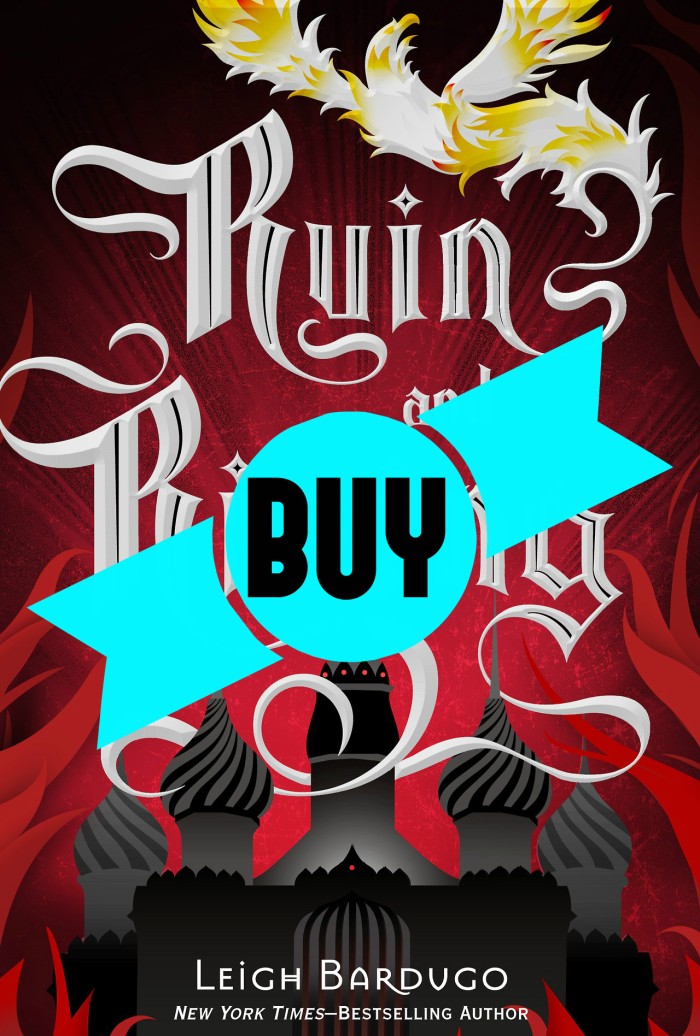 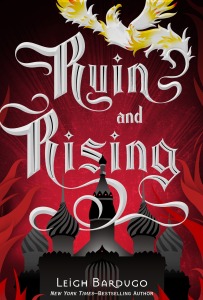 The capital has fallen. The Darkling rules Ravka from his shadow throne.

Now the nation’s fate rests with a broken Sun Summoner, a disgraced tracker, and the shattered remnants of a once-great magical army.

Deep in an ancient network of tunnels and caverns, a weakened Alina must submit to the dubious protection of the Apparat and the zealots who worship her as a Saint. Yet her plans lie elsewhere, with the hunt for the elusive firebird and the hope that an outlaw prince still survives.

Alina will have to forge new alliances and put aside old rivalries as she and Mal race to find the last of Morozova’s amplifiers. But as she begins to unravel the Darkling’s secrets, she reveals a past that will forever alter her understanding of the bond they share and the power she wields. The firebird is the one thing that stands between Ravka and destruction―and claiming it could cost Alina the very future she’s fighting for.

*Warning: There will be minimal spoilers about Siege and Storm in this review. Read at your own risk.*

Up to this book I wasn’t all that impressed with the Grisha trilogy. Don’t get me wrong, it’s good but I didn’t think it was worth the hype. Then Bardugo gave me Ruin and Rising and I was like, “Yes! This is what I’m talking about.” First of all, Mal finally seemed worthy of Alina to me. He stepped up in a big way and I finally felt okay shipping them, although Nikolai will always be my number one.

More than Mal’s character development was the plot. It was filled with action, twists that I saw coming but were still very well done, and just overall awesomeness. I will be the first to admit that I skim plot. I just can’t deal with paragraphs of details. Get to the action! Get to the dialogue! But in this book the action was in the paragraphs of details and thus I was sucked in. I read (almost) every word and loved it all. I can’t think of anything I didn’t thoroughly enjoy about this novel. The characters were great, Alina’s group was squad goals, and the romance was just the right amount. What I loved most of all was the ending and how everything came together. I hate when I follow a series and then the end is a hot mess. Bardugo totally delivered with this finale and it’s my favorite book in the whole trilogy.

Ruin and Rising is definitely a buy for me, which means I have to buy the whole series. Thankfully there’s a box set coming out soon. Who doesn’t love a good box set?

“Beauty was your armor. Fragile stuff, all show. But what’s inside you? That’s steel. It’s brave and unbreakable. And it doesn’t need fixing.”

She Reads Too Much