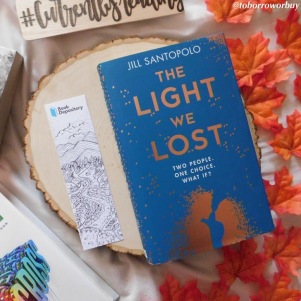 He was the first person to inspire her, to move her, to truly understand her. Was he meant to be the last?

Lucy is faced with a life-altering choice. But before she can make her decision, she must start her story—their story—at the very beginning.

Lucy and Gabe meet as seniors at Columbia University on a day that changes both of their lives forever. Together, they decide they want their lives to mean something, to matter. When they meet again a year later, it seems fated—perhaps they’ll find life’s meaning in each other. But then Gabe becomes a photojournalist assigned to the Middle East and Lucy pursues a career in New York. What follows is a thirteen-year journey of dreams, desires, jealousies, betrayals, and, ultimately, of love. Was it fate that brought them together? Is it choice that has kept them away? Their journey takes Lucy and Gabe continents apart, but never out of each other’s hearts.

This devastatingly romantic debut novel about the enduring power of first love, with a shocking, unforgettable ending, is Love Story for a new generation.

I wanted to love this book. I really did. I thought the premise was great and I’m a sucker for a tragic love story. But unlike Will and Lou in Me Before You, I found Lucy and Gabe to be totally unlikable characters.

The novel is told in the point of view of Lucy, who’s telling the story to Gabe. The story is of their love, beginning with how they met on September 11, 2001 and all the events that followed. I think anyone who was alive on that day, especially if they lived in New York City, remembers where they were on 9/11. It’s just something you can’t forget. So in this way, I could see why Lucy and Gabe felt such a strong connection to each other. On a day that was filled with such darkness, they were able to find light with each other. It’s truly a romantic idea.

However, I don’t think their intense connection excused their actions. I tried desperately to feel sympathetic, or rather, empathetic, towards the two of them but I just couldn’t support their decisions, beginning with the way Gabe informed Lucy he was leaving New York to be a photojournalist in the Middle East. I don’t want to spoil it, but it was the worst possible time for him to tell her that, but he was too selfish to care. Similarly, Lucy was too irrational to think through her decisions later on, whenever it came to Gabe.

There were definitely some nice moments in this book that I enjoyed and the writing itself was definitely beautiful, but overall, I was disappointed with this novel. If you’ve read The Light We Lost, let me know your thoughts on it below!

“He said not only would he not break you, that he’d help put you back together.”

2 thoughts on “Book Review: The Light We Lost”