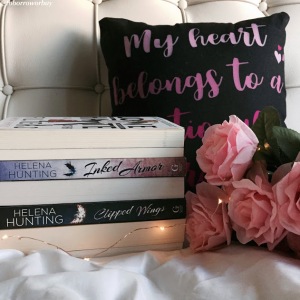 In this follow-up to Clipped Wings, the emotional love story continues between Hayden and Tenley; two young people who desperately want to love and be loved but are afraid to completely let go of their pasts.

In the wake of losing Tenley Page, tattooist Hayden Stryker’s tumultuous past is haunting him. Plagued by nightmares about the murder of his parents, Hayden reaches out again to Tenley. Having run from the man she doesn’t believe she deserves, Tenley finally lays her guilt to rest. Despite their intense physical attraction, Hayden and Tenley struggle to repair their fragile emotional connection. As Hayden gets closer to the truth, he must find a way to reconcile his guilt over his parents’ death in order to keep the woman who finally cracked his armor, and found her way into his heart.

Inked Armor picks up two weeks after the end of Clipped Wings. Tenly has returned to her hometown to get her affairs in order and to figure out all her complicated feelings about her past so she can be in a real relationship with Hayden. Of course, she went about this all wrong, and really hurt Hayden.

Once Tenley returns to Chicago, fixing their relationship is much easier said than done. They’ve both been hurting because of their dark pasts and while Tenley has finally begun to come to grips with hers, Hayden must now face the ghosts of his.

I really liked that this book took more of look at Hayden’s issues, because they were definitely hinted at in the first novel but weren’t ever really explored. In this book we learn more about Hayden’s parents, the night they died, and how that one night really altered Hayden’s life. I also really enjoyed the kind of mystery surrounding that night as well. I started making my own guesses at who could’ve killed Hayden’s parents and while I was right, I was also still surprised, which I loved.

Besides that, this book also didn’t disappoint in the romance/smut department. The scenes between Hayden and Tenley were just as steamy and interesting. They can really just hook-up anywhere, honestly. More than the smut though, their relationship was incredibly cute, as were the other couples in this novel.

Overall, I thought this was an excellent sequel and perfect end to this duology. I’ll definitely still be reading all the short stories in this series, though. I already bought them all on my Kindle. Can you tell I’m obsessed?

“The most dangerous criminals are the ones who appear the least threatening.”

Other Reviews
Love & Other Bookish Things
Bookish Temptations
The Good, The Bad, & the Unread

happy sunday! what's everyone reading? i just finished winter's orbit and now i'm focusing all my attention on rise to the sun 🌞