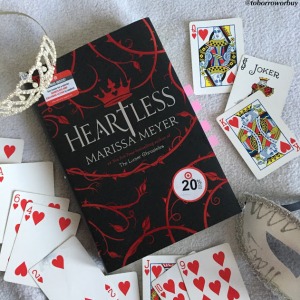 Long before she was the terror of Wonderland, she was just a girl who wanted to fall in love. Catherine may be one of the most desired girls in Wonderland, and a favorite of the unmarried King of Hearts, but her interests lie elsewhere. A talented baker, all she wants is to open a shop with her best friend. But according to her mother, such a goal is unthinkable for the young woman who could be the next queen.

Then Cath meets Jest, the handsome and mysterious court joker. For the first time, she feels the pull of true attraction. At the risk of offending the king and infuriating her parents, she and Jest enter into an intense, secret courtship. Cath is determined to define her own destiny and fall in love on her terms. But in a land thriving with magic, madness, and monsters, fate has other plans.

Full disclosure, my knowledge about Alice in Wonderland is very limited. It’s so limited that for some reason I got it in my head that the Queen of Hearts and the Red Queen were the same person, which confused me a bit while I was reading. In case you thought the same I’m here to tell you they’re two different people. My point is, I didn’t love this novel but I think that might be because a lot of the references to the original novel by Lewis Carroll went over my head.

For instance, I never knew the riddle, “Why is a raven like a writing desk,” came from Alice in Wonderland. I just thought it was a popular riddle until I read this book. So with that in mind please note that while I didn’t particularly love this novel that doesn’t necessarily mean you won’t but here’s why I personally didn’t enjoy it.

First, I found Cath to be particularly infuriating. I hate indecisive characters and Cath didn’t make any real decisions until about two thirds into the novel. Also, while I realize the King of Hearts was purposefully made to be stupid and irritating I found him too irritating and every time he appeared I wanted to skim through those scenes. The only characters I truly loved in this novel were Jest and Hatta. I especially liked Hatta because I found his back story to be very interesting and he was pretty snarky, which I loved.

Otherwise though, almost every character drove me crazy. Cath’s mother was particularly annoying and while her father wasn’t as bad he was also pretty bad. Cath’s friend and maid was okay but the fact that I can’t even remember her name is a clear indication that she wasn’t all that memorable (I looked it up; it’s Mary Ann).

Also, one character, Jack, was extremely annoying and rude to Cath and that’s never explained. I thought it might be because he’s like a childish boy who had a crush on her so he treated her poorly but it was never said. He was just irritating for no reason. It was so strange!

Overall, this is definitely a novel I won’t be rereading however I almost want to make this a buy just because the cover is so incredibly gorgeous. But alas, not even the cover could save this one for me. I loved The Lunar Chronicles and had high hopes for Marissa Meyer’s follow up to the series but unfortunately Heartless was sorely disappointing.

“Sometimes your heart is the only thing worth listening to.”