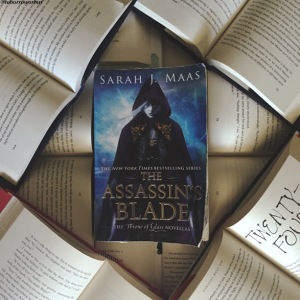 Celaena Sardothien is Adarlan’s most feared assassin. As part of the Assassin’s Guild, she’s sworn to her master, Arobynn Hamel, yet Celaena listens to no one and trusts only her fellow killer for hire, Sam.

In these action-packed prequel novellas to Throne of Glass, Celaena embarks on five daring missions. They take her from remote islands to hostile deserts, where she fights to liberate slaves and avenge tyranny. But by acting on her own terms, will Celaena truly free herself from her master, or will she suffer an unimaginable punishment for such treachery?

This bind-up features all four of the previously published e-novellas along with a story now available in the US for the first time, The Assassin and the Healer.

It took me forever, but I finally finished the Throne of Glass series. The Assassin’s Blade was the only book holding me back but after realizing I was behind on my Goodreads challenge I finally got the push I needed to finish it. It took me so long to read this book not because it was bad but because I knew how it would end and I wasn’t looking forward to that ending. In truth, the book was actually very good.

I really enjoyed learning more about Celaena’s past and her relationship with Sam. Now I finally understand why everyone loves him. He was amazing and my heart hurts for him and what he went through. This book also made me realize even more why I do not like Arobynn. He is honestly a trash human being and so incredibly manipulative that it tittered the line of unbelievable.

Reading this novel after I read Empire of Storms definitely cleared up a lot of questions I had about Empire of Storms. In The Assassin’s Blade I learned the history of the Silent Assassins, Ansel, and the Pirate Lord, all of which comes in handy with where the series is currently at.

Overall, The Assassin’s Blade was definitely worth a read and I’m glad I finally read it and can now say I’ve read all of Sarah J. Maas books this year. It’s crazy to think I didn’t even know who she was a year ago. Make sure to check out Maas’ novels if you haven’t yet. They’re all spectacular.

“I love you. And from today onward, I want to never be separated from you. Wherever you go, I go. Even if that means going to Hell itself, wherever you are, that’s where I want to be. Forever.”

Beauty and the Bookshelf

One thought on “Book Review: The Assassin’s Blade”