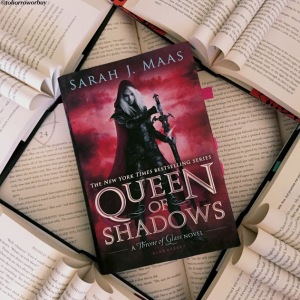 Everyone Celaena Sardothien loves has been taken from her. But she’s at last returned to the empire-for vengeance, to rescue her once-glorious kingdom, and to confront the shadows of her past…

She has embraced her identity as Aelin Galathynius, Queen of Terrasen. But before she can reclaim her throne, she must fight.

Celaena’s epic journey has captured the hearts and imaginations of millions across the globe. This fourth volume will hold readers rapt as Celaena’s story builds to a passionate, agonizing crescendo that might just shatter her world.

*Warning: There will be spoilers about Heir of Fire in this review. Read at your own risk.*

Queen of Shadows is my favorite book in this series so far. I haven’t read The Assassin’s Blade but I feel confident in saying Queen of Shadows is my absolute favorite. Everything about it was great. There was a lot of action, drama, romance, and there were a lot of twists and secrets revealed. The novel began with Aelin back in Rifthold to start making moves to take back her kingdom and ultimately save the world from the dark clutches of the King of Adarlan. Unfortunately a lot had changed since Aelin was last in Rifthold.

Dorian was under the control of a Valg prince do to the nice little choker his father put on him after Chaol escaped from the castle. Aedion, Aelin’s cousin, was imprisoned in the castle awaiting his execution and people kept disappearing in Rifthold while the rebels in the city tried to save them all. Not to mention the fact that Aelin also needed to pay the Assassin King a visit because he had one of the Wyrdkeys. Needless to say Aelin had a lot of work to do in this novel and as per usual she handled it with a high degree of sass and swagger. Her plans continued to surprise me (and the other characters in this novel) and I never knew what to expect, which made this novel so fun to read.

It was heartbreaking to read the chapters about Dorian and his enslavement. I wanted to cry every time we had one of those chapters but I pushed through. This novel also contained some new characters that I fell in love with, mainly Lysandra and Nesyrn. I love all the bad ass women we get in this series and these two were an amazing addition to the growing cast of characters in these novels. We also learned more about Manon and the witches in this novel but honestly I didn’t really care all that much about them. Although I do love Manon’s wyern, Abraxos. He’s the best.

Like I said I absolutely loved this novel and I think you should buy it immediately if you haven’t already. It’s worth every penny and I’ve already reread it because I have no self-control. Sorry not sorry.

“You make me want to live, Rowan. Not survive; not exist. Live.”

One thought on “Book Review: Queen of Shadows”