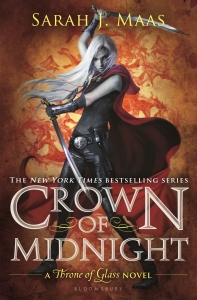 She is the greatest assassin her world has ever known.
But where will her conscience, and her heart, lead her?

After a year of hard labor in the Salt Mines of Endovier, eighteen-year-old assassin Celaena Sardothien has won the king’s contest to become the new royal assassin. Yet Celaena is far from loyal to the crown – a secret she hides from even her most intimate confidantes.Keeping up the deadly charade-while pretending to do the king’s bidding-will test her in frightening new ways, especially when she’s given a task that could jeopardize everything she’s come to care for. And there are far more dangerous forces gathering on the horizon — forces that threaten to destroy her entire world, and will surely force Celaena to make a choice. Where do the assassin’s loyalties lie, and who is she willing to fight for?

*Warning: There will be spoilers about Throne of Glass in this review. Read at your own risk.*

I’m speeding through this series and I’m loving it. I literally cannot put these books down; I’m hooked. Crown of Midnight begins a bit after Throne of Glass. Now that Celaena is the King’s Champion she’s being sent all over to kill rebels for him, which is particularly difficult for Celaena because she hates the King with a passion. Still, the King has warned her if she disobeys his order he’ll kill Chaol and Nehemia and Nehemia’s family so Celaena has no choice but to be obedient. Or at least to pretend to be.

At the same time, now that her relationship with Dorian is over Celaena has moved on and she and Chaol begin to really acknowledge their feelings for each other, which puts a strain on Dorian and Chaol’s friendship. The romance between Celaena and Chaol gave me all the feels and I can see why people love Chaol now. Despite the romance though, this book got pretty dark and I was surprised by it. This book was the first sign that Sarah J. Maas doesn’t pull punches and I felt like I got hit right in the gut multiple times throughout this book. What really got me though was the ending.

Although I knew the twist at the end beforehand I loved how it all played out and the big reveal. It was the perfect conclusion to this book and I’m so glad the next book is already out because I can’t even imagine what that must’ve felt like if you had to wait a year to read the next one.

“The kiss obliterated her. It was like coming home or being born or suddenly finding an entire half of herself that had been missing.”

One thought on “Book Review: Crown of Midnight”