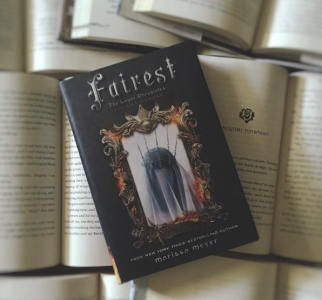 Pure evil has a name, hides behind a mask of deceit, and uses her “glamour” to gain power. But who is Queen Levana? Long before she crossed paths with Cinder, Scarlet, and Cress in The Lunar Chronicles, Levana lived a very different story―a story that has never been told . . . until now. New York Times –bestselling author Marissa Meyer reveals the story behind her fascinating villain in Fairest, an unforgettable tale about love and war, deceit and death.

I finally read Fairest and I didn’t love it. It took me forever to read because I hated Levana. I was hoping Fairest would open my eyes to another side of Levana that I couldn’t see or understand in The Lunar Chronicles but that wasn’t the case. This book just made me like Levana even less. However, it was awesome to see Cinder’s mom, Channary, even though she wasn’t a great person either, and Winter’s dad who deserved so much better.

I pretty much liked all the characters in this book except Levana and although I’m happy I read it because now I can officially say I’ve read all the books in The Lunar Chronicles series, I definitely wouldn’t read it again. It was well written and the plot was fine but I didn’t enjoy reading it at all. Levana was just too infuriating and any sympathy I had for her at the start of the novella was gone by the end.

If you love The Lunar Chronicles I think you should read Fairest just because it does provide some interesting background but you don’t have too. It wasn’t as good as the other books in the series and nothing absolutely crazy happened that you must read. Overall, Fairest is definitely a borrow for me.

“Maybe the princess could save herself.”
“That sounds like a pretty good story too.”

One thought on “Book Review: Fairest”