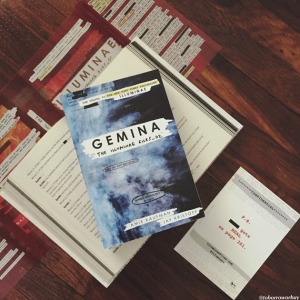 Moving to a space station at the edge of the galaxy was always going to be the death of Hanna’s social life. Nobody said it might actually get her killed.
The sci-fi saga that began with the breakout bestsellerIlluminae continues on board the Jump Station Heimdall, where two new characters will confront the next wave of the BeiTech assault.
Hanna is the station captain’s pampered daughter; Nik the reluctant member of a notorious crime family. But while the pair are struggling with the realities of life aboard the galaxy’s most boring space station, little do they know that Kady Grant and theHypatia are headed right toward Heimdall, carrying news of the Kerenza invasion.
When an elite BeiTech strike team invades the station, Hanna and Nik are thrown together to defend their home. But alien predators are picking off the station residents one by one, and a malfunction in the station’s wormhole means the space-time continuum might be ripped in two before dinner. Soon Hanna and Nik aren’t just fighting for their own survival; the fate of everyone on the Hypatia—and possibly the known universe—is in their hands.
But relax. They’ve totally got this. They hope.
Once again told through a compelling dossier of emails, IMs, classified files, transcripts, and schematics, Gemina raises the stakes of the Illuminae Files, hurling readers into an enthralling new story that will leave them breathless.

*I received a free advanced reader’s copy of this book from First in Line. This did not influence my review of this book in anyway. This is an honest review of the novel as I saw it. This novel will be released on October 18, 2016.*

There will be minimal spoilers for Illuminae in this review so tread carefully if you haven’t read it yet.

As soon as I finished Illuminae I picked up Gemina and I’m so incredible grateful that I was able to do that because this book is SO good! Typically I don’t like when sequels in a series don’t follow the same main characters in the first novel but I was so in love with the new characters in Gemina that it didn’t bother me at all.

In this novel the main characters are Hanna and Nik, two teens that come from two very different backgrounds. Hanna is the spoiled daughter of the Heimdall station’s captain, and Nik is part of the House of Knives crime family. While Hanna, Nik, and the rest of the residents on Heimdall are preparing for Terra Day (basically a day of celebration of parties), Kady and the rest of the Hypatia crew are on their way to Heimdall, as are some BeiTech troops and some drone ships. Awesome.

Although totally unplanned Hanna and Nik found themselves as the only means of protection for Heimdall and the only hope for the Hypatia crew. Together they’ll have to team up and figure out a way to save everyone…and the universe. Naturally things get complicated and Hanna and Nik have to trust each other if they even stand a chance of make it out of all of this alive. Just as with Illuminae, Gemina is filled with adventure, humor, plot twists, and a little romance. Also, the side characters are just as amazing as the MCs. When y’all meet Ella, you’ll know exactly what I mean. She’s a boss.

Anyway, the point is I couldn’t put this book down. I did, however, have to turn it upside down a few times. Just like Illuminae, this book is written in the same format of emails, surveillance logs, chat logs, journal entries, etc. I love how this book is formatted and the ending nearly killed me. I need to know what happens next!

Also, if you love Kady and the rest of the Hypatia crew as much as I did don’t worry they make an appearance in Gemina too but that’s all I’m going to say about that. No spoilers! I can’t wait for this book to come out so I can talk about it with all of you. It’s amazing!

Mary Had A Little Book Blog