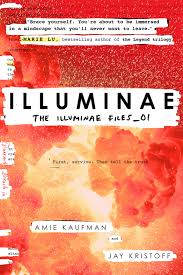 This morning, Kady thought breaking up with Ezra was the hardest thing she’d have to do. This afternoon, her planet was invaded.
The year is 2575, and two rival megacorporations are at war over a planet that’s little more than a speck at the edge of the universe. Now with enemy fire raining down on them, Kady and Ezra—who are barely even talking to each other—are forced to evacuate with a hostile warship in hot pursuit.
But their problems are just getting started. A plague has broken out and is mutating with terrifying results; the fleet’s AI may actually be their enemy; and nobody in charge will say what’s really going on. As Kady hacks into a web of data to find the truth, it’s clear the only person who can help her is the ex-boyfriend she swore she’d never speak to again.
Told through a fascinating dossier of hacked documents—including emails, maps, files, IMs, medical reports, interviews, and more—Illuminae is the first book in a heart-stopping trilogy about lives interrupted, the price of truth, and the courage of everyday heroes.

This is apparently the week of books written in unconventional writing styles. Although Illuminae is a very different book than The Boy is Back, it’s also told in the form of emails, IMs, and other various styles, which makes it really interesting and different. You know you’re reading an interesting book when you have to turn it upsides and sideways just to read it.

I was totally sucked into this novel. I’ve had this book on my shelf for months now and I have no idea why it took me this long to finally read it but I’m so glad I did. The main character, Kady, is such an amazing character. She’s goals. Seriously. The way she’s able to step up and take control when literally everything in her life has gone to crap is astounding and inspiring. I also really liked her ex, Ezra. He was so cute and funny and cheesy. Seriously, those two are relationship goals. Even when they fight it’s out of love.

Besides the romance, this book was a roller coaster. It seemed like every time Kady was getting her footing some other disaster would strike her world, turning it upside down (sometimes literally). This book was filled with plot twists and I had my heart broken multiple times throughout. If you think everyone makes it out of this book unscathed think again. I applaud Amie Kaufman and Jay Kristoff on keeping things real. This book is devastating but also filled with humor. It’s an interesting combination and I couldn’t put this book down.

If you love sci-fi, adventure, with a bit of romance and humor, you’ll love this book. I honestly had no idea what I was signing up for going into this book but I loved every second of this book and the sequel is just as good but I’ll get more into that in my next review. Until then, make sure to buy Illuminae and preorder the sequel, Gemina. Trust me, you’ll want it as soon as it comes out.

“You have me. Until the last star in the galaxy dies, you have me.”