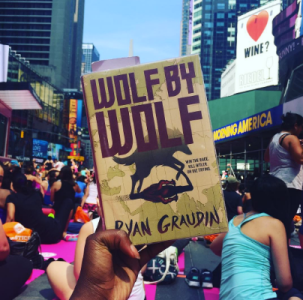 The year is 1956, and the Axis powers of the Third Reich and Imperial Japan rule. To commemorate their Great Victory, they host the Axis Tour: an annual motorcycle race across their conjoined continents. The prize? An audience with the highly reclusive Adolf Hitler at the Victor’s ball in Tokyo.

Yael, a former death camp prisoner, has witnessed too much suffering, and the five wolves tattooed on her arm are a constant reminder of the loved ones she lost. The resistance has given Yael one goal: Win the race and kill Hitler. A survivor of painful human experimentation, Yael has the power to skinshift and must complete her mission by impersonating last year’s only female racer, Adele Wolfe. This deception becomes more difficult when Felix, Adele’s twin brother, and Luka, her former love interest, enter the race and watch Yael’s every move.

But as Yael grows closer to the other competitors, can she be as ruthless as she needs to be to avoid discovery and stay true to her mission?

I was hesitant to read this book because I’m not typically a fan of historical fiction. It’s just not my genre. Although I found the beginning of this book rather slow once it picked up it was amazing and I couldn’t put it down. Wolf by Wolf takes place in an alternate universe where the Axis powers actually won World War II and Hitler has power over most of the world. This is a terrifying idea especially considering current times and that alone made my heart race. The main character, Yael, is Jewish and was in a concentration camp with her mother but was able to escape due to a medical procedure that was done to her in the camp. Yael can now change her skin to look like anyone.

Using this ability she sneaks into a huge motorcycle race called the Axis Tour, and her end goal is to win so she can have the opportunity to kill Hitler and start a revolution. But no pressure or anything.

With everything basically riding on Yael to succeed she is determined to do whatever it takes to win but she also tries not to lose herself in the process. This book was filled with action, a very small bit of romance (just the right amount in my opinion), and a lot of emotions. My heart raced with Yael and I never knew what would happen. I absolutely loved this book and I can’t wait to dive into the sequel.

“The world is wrong. I’m just doing my part to fix it.”

q: do you use bookmarks, dog ear (🤢), or just close your book and hope for the best?