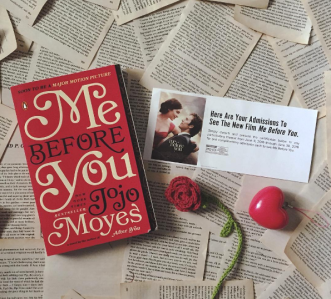 I was lucky enough to win two “free” (up to $12 value which in NYC doesn’t cover the whole ticket) tickets to see Me Before You and I was super excited because I absolutely loved the book. I feel like I read the book recently enough to do a full comparison between the two and thus begins a new segment on my blog I’m calling From Page to Screen. I hope to do this with some other books to movie/TV in the future but for now here’s my full assessment on Me Before You.

*Note: If you don’t want to be spoiled about the movie and/or the book look away!*

Emilia Clarke was the perfect Louisa. She was totally awkward and quirky, exactly as I imagined she would be. And the outfits! So spot on! Sam Claflin played such a good Will Traynor and the chemistry between the two of them was undeniable. I absolutely loved it.

Matthew Lewis as Patrick was surprisingly good. Not to say that Matthew is a bad actor but it’s always hard to see an actor who you know as one character (Neville) become someone completely different. But Lewis did an amazing job. I hated Patrick almost as much as I hated him in the book, which was the point.

The whole Clark family was spot on but I definitely liked Treena more in the movie than I did in the books. I think that’s mainly because we don’t really see a lot of her in the movie. In the book she was very bratty to me and I didn’t like how she just expected Lou to pick up the slack and support the family while she went off to school. In the film Lou and Treena are very close and you don’t really see the different dynamics to their relationship as much as you do in the book.

Also, I don’t remember Lou’s mom’s religion be the explicit reason why in the books she didn’t approve of Lou going to be with Will in Switzerland, however in the movie it is heavily implied that that’s the case. Still this was something minor and the fact remains that they got the character of Lou’s mom perfectly.

One character that didn’t make it into the movie was Will’s sister, Georgina. Honestly, I didn’t really miss her that much. She didn’t play a big role in the book so her being taken out wasn’t that big of a deal.

For the most part the movie stuck to the book but I was very upset that they removed Lou’s rape scene in the maze. This was a major part of the book and the main reason why Lou was so stuck in her town. If you didn’t read the book, Lou went out with her friends and got very drunk. They, along with a group of guys they met, went to the castle and went in the maze. Lou got lost and couldn’t find her way out and she was surrounded by those guys. The next thing she knows she wakes up naked and alone, and Treena had to take her home.

Lou and Treena never spoke about that night again, Lou never hung out with those girls again, and Lou never told anyone about that until Will challenges her to go through the maze and she has a panic attack. Lou finally opens up about what happened that night and how she cancelled the trip she was supposed to take and decided it was better and safer to just stay in her little town.

That was a major plot point and the fact that it wasn’t even mentioned in the film was devastating to me because when I read that in the book I finally felt like I understood Lou. It explained so much about her and why she was the way she was. More than that, to me, it made her relationship with Will seem more real. Will helped her in a lot of ways but Lou opening up to him about that night was a huge turning point in their relationship. To me, that’s when they really started, or at least realized, they were falling in love with each other.

Some smaller plot points that were missing was Mr. Traynor’s (Will’s dad) affair and Lou moving in with Patrick. Both of these weren’t really that big of a deal to me. I hated when Lou moved in with Patrick in the book so I didn’t miss seeing it in the movie. And I was glad Will’s dad was less of a jerk in the movie, plus you could still see how Will’s parents marriage was strained in the movie, just without the affair.

As always the book was better than the movie. Still, the movie came pretty close and I would definitely see it again. It made me cry just like the book did and I loved seeing these characters come to life on screen. It’s definitely worth seeing if you haven’t already.

Have you seen Me Before You yet? What did you think of it? Let me know in the comments below!