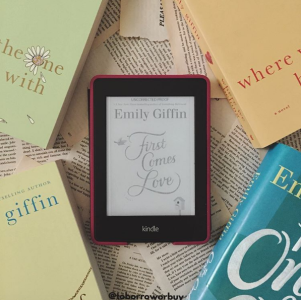 Fifteen years later, Josie and Meredith are in their late thirties, following very different paths. Josie, a first grade teacher, is single—and this close to swearing off dating for good. What she wants more than the right guy, however, is to become a mother—a feeling that is heightened when her ex-boyfriend’s daughter is assigned to her class. Determined to have the future she’s always wanted, Josie decides to take matters into her own hands.

On the outside, Meredith is the model daughter with the perfect life. A successful attorney, she’s married to a wonderful man, and together they’re raising a beautiful four-year-old daughter. Yet lately Meredith feels dissatisfied and restless, secretly wondering if she chose the life that was expected of her rather than the one she truly desired.

As the anniversary of their tragedy looms, and painful secrets from the past begin to surface, Josie and Meredith must not only confront the issues that divide them but also come to terms with their own choices. In their journey toward understanding and forgiveness, both sisters discover that they need each other more than they knew—and that in the search for true happiness, love always comes first.

*I received a free digital advanced reader’s copy of this book from Ballantine Books via NetGalley. This did not influence my review of this book in anyway. This is an honest review of the novel as I saw it. This novel will be released on June 28, 2016.*

For the record, although I personally wouldn’t buy this book I didn’t hate it I just didn’t love it as much as I had hoped I would.

First Comes Love is told in the alternating point of views of Josie and Meredith. While Meredith has a more type-A kind of personality and a seemingly perfect life, Josie is more carefree and a little crazy. The sisters handle the death of their brother, Daniel, very differently. For Meredith she feels like she has to be the perfect daughter for her parents and do whatever will make them happy. Josie, conversely, doesn’t discuss her brother’s death and tries not to think about it all.

I found Meredith to be irritating. I just didn’t really like her personality and I definitely sided with Josie for most of the novel, though Josie does make mistakes as well. I was also confused by the direction of the plot, particularly Josie’s storyline. There’s three significant men in Josie’s life: Will (her ex), Gabe (her best friend), and Pete (a guy she kind of dates). I was surprised by how Josie’s relationship with all three of them played out and honestly, I didn’t really like it. It just seemed like a strange ending to me and I didn’t get it at all.

I did, however, like how Meredith’s story ended, or more accurately, how it was kind of left open ended. Meredith definitely grew on me towards the end, but Josie is definitely my favorite of the two sisters.

Overall, I just didn’t love this book. Out of all the characters I think my favorite was Gabe but I still didn’t really connect with him. As always Emily Giffin’s writing was superb but the plot itself didn’t enthrall me, which is why I won’t be adding it to my shelf.

The Suspense is Thrilling Me

happy sunday! what's everyone reading? i just finished winter's orbit and now i'm focusing all my attention on rise to the sun 🌞