I can’t believe BookCon was only four days ago. It feels so long ago. It feels like dream! A magical dream filled with books and authors and other book nerds that understand my obsession.

BookCon was everything I hoped for. I went to four different author signings with Alexandra Bracken (The Darkest Minds), Maggie Stiefvater (The Raven Cycle), Jenny Han (To All The Boys I Loved Before), and Natalie Richards (Six Months Later). I was hoping to go to Sarah J. Maas and Victoria Aveyard’s signings but they filled up before I could get wrist bands.

Most of the signings occurred in the Autographing Area and in order to get into those signings you had to get a wristband. At 8 AM they opened up this room that were filled with Chutes and you waited in the Chute for whichever author you wanted to go to a signing for. Each Chute had multiple authors but you could only get one wristband at a time. For example, I waited in Chute 8 to get a wristband for Sarah J. Maas but it filled up before I got to the front but Chute 8 also had Maggie Stiefvater and Veronica Roth. I knew I couldn’t get both because I’d have to wait in line again and by then the author I didn’t choose would probably be full so I chose Maggie because I’m completely obsessed with The Raven Cycle.

Similarly, I was waiting in a chute for Victoria Aveyard and Marissa Meyer and both filled up before I got to the front so I ended up leaving that chute and going to another one where I got the last wristband for Jenny Han. Overall, the whole autographing process was crazy but I’m happy with the authors I got to meet and now I know for next year I have to get there earlier. I got there around 7:30 AM but someone else got there as early as 3:30 AM. I won’t be getting there that early next time but I’ll try for 6 AM.

Although I didn’t get to meet Maas and Aveyard I did get to hear them speak on the Book-Hooked panel with Laini Taylor and that was amazing. Sarah is hilarious and such a fan girl. She told us about how dorky she was in high school and her love for The Lord of the Rings, Sailor Moon, and Buffy. Victoria and Laini were also great and all three of them had great chemistry and you could tell they’re really friends and fans of each other.

Book-Hooked was the only panel I made it to and I wish I went to more but I’m happy with the one I went to. It was really good and I got a sampler of Taylor’s new book, Strange the Dreamer. I haven’t read any of Taylor’s books before so I’m excited to read this and see if I like it.

Besides the panels and the autographing sessions, it was great to just walk around the different booths. I went to the OwlCrate booth and spun their wheel and won a reading journal. I already have one so I gave it to my friend but they also gave me a tote bag and there were free buttons so I took a couple. I also got four ARCs including Blood for Blood, the sequel to Wolf by Wolf, which I just requested from my library.

I also bought four books, three for signings and one that was on sale at the Penguin Random House booth. And then I also got four books for free from different publishers, including The Shack, which I’ve heard is really good. So in total I got 12 books, which is kind of crazy. I also got a couple of samplers of upcoming releases, which I’m super excited about. 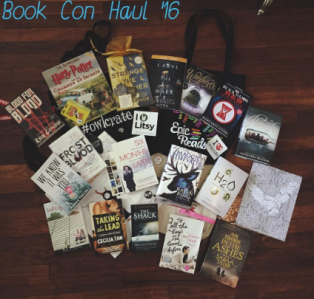 All in all, it was a great day and I got so much stuff. I also met up with a fellow bookstagrammer who was super nice and was there with her husband and kids, which was super cute. It was amazing to be surrounded with other book people and I even saw a few people in cosplay, which was cool. This is the first con I’ve ever been to and now I can’t wait to do it all over again.

Thankfully, BookCon will be back in New York, which is super convenient for me. I already marked it on my calendar so I don’t plan a vacation the same weekend, which is what happened the last time BookCon was in New York. I can’t wait until it’s BookCon time again. I miss it already.

8 thoughts on “My Very First BookCon”