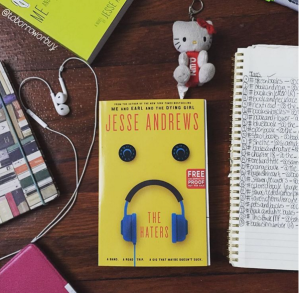 From Jesse Andrews, author of the New York Times bestselling Me and Earl and the Dying Girland screenwriter of the Sundance award–winning motion picture of the same name, comes a groundbreaking young adult novel about music, love, friendship, and freedom as three young musicians follow a quest to escape the law long enough to play the amazing show they hope (but also doubt) they have in them.

Inspired by the years he spent playing bass in a band himself, The Haters is Jesse Andrews’s road trip adventure about a trio of jazz-camp escapees who, against every realistic expectation, become a band.

For Wes and his best friend, Corey, jazz camp turns out to be lame. It’s pretty much all dudes talking in Jazz Voice. But then they jam with Ash, a charismatic girl with an unusual sound, and the three just click. It’s three and a half hours of pure musical magic, and Ash makes a decision: They need to hit the road. Because the road, not summer camp, is where bands get good. Before Wes and Corey know it, they’re in Ash’s SUV heading south, and The Haters Summer of Hate Tour has begun.

In his second novel, Andrews again brings his brilliant and distinctive voice to YA, in the perfect book for music lovers, fans of The Commitments (author Rody Doyle raves “The Haters is terrific.  It is shocking and funny, unsettling and charming.” ), and High Fidelity, or anyone who has ever loved—and hated—a song or a band. This witty, funny coming-of-age novel is contemporary fiction at its best.

*I received a free advanced reader’s copy of this book from Amulet Books. This did not influence my review of this book in anyway. This is an honest review of the novel as I saw it. This novel will be released on April 5, 2016.*

First, when I said I was going to take a break I never intended it to be a week long thing so I’m super sorry about that. I hit a really bad reading slump and I had to stop reading a book because it was just going too slow for me.

I haven’t had a chance to read Me and Earl and the Dying Girl yet so this was my first Jesse Andrews novel and I absolutely loved it. His writing style is so different and creative and his characters are flawed, witty, and a little insane. I absolutely fell in love with the narrator and main character, Wes. He’s pretty weird and dorky but also an overall good guy.

His best friend, Corey, is equally strange but in a very different way. And the way that Corey and Wes interact with each other is fantastic. They have this weird bit they do about harming their dicks, which like I said is very weird, but was very funny to me.

Then you have Ash who I had a love/hate relationship for various reasons. Mainly, I’m just not sure if I’m supposed to like her. Throughout the novel I feared she’d come between Corey and Wes’ friendship but also I just didn’t want her to hurt Wes. I love Wes so much and I just had a, “We need to protect Wes at all costs,” vibe going throughout my whole reading of this novel.

Overall, though, I really enjoyed how Wes, Corey, and Ash worked together. Their band is a bit of a hot mess but their friendship is solid. One of my favorite parts of this novel was the way the dialogue is written. Sometimes it’s the typical way with quotations but a lot of times it was written in script format. And then there was one or two chapters where Andrews just seemed to say, “Eff it,” and just wrote with no quotations or script style but people were communicating. Things got a little hazy during that part but I’m pretty sure that was intentional because the characters were high.

I will state for the record that I don’t think this book is for everyone. I think you have to have a certain sense of humor or at least be open to a different kind of humor to really enjoy this book. If you don’t like the humor you’re not going to like this book at all. I could definitely see some people thinking this novel is strange or not good but for me I loved it. Andrews made me laugh but more than that I think this book had a pretty good message about being yourself and also not being afraid to take risks sometimes.

I say give this book a chance. If it’s not for you then fine, but I’d definitely purchase myself a copy if I were you.

It’s Either Sadness or Euphoria

One thought on “ARC Book Review: The Haters”