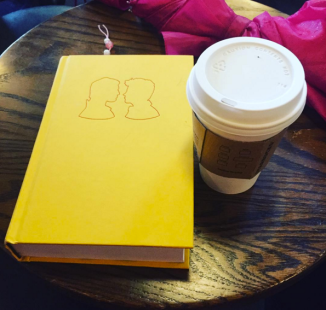 Simon Snow is the worst Chosen One who’s ever been chosen.

That’s what his roommate, Baz, says. And Baz might be evil and a vampire and a complete git, but he’s probably right.

Half the time, Simon can’t even make his wand work, and the other half, he starts something on fire. His mentor’s avoiding him, his girlfriend broke up with him, and there’s a magic-eating monster running around, wearing Simon’s face. Baz would be having a field day with all this, if he were here–it’s their last year at the Watford School of Magicks, and Simon’s infuriating nemesis didn’t even bother to show up.

It took me way too long to finally read this book but I’m so glad I did. I absolutely loved it and even though I know Rainbow Rowell wrote the book it felt like Cath from Fangirl wrote it, which was great.

Told in multiple point of views, Carry On tells the story of Simon Snow, a less heroic Harry Potter in my opinion. He’s supposedly the greatest mage (wizard) there ever was and he’s meant to stop the Insidious Humdrum (kind of like Voldemort but way more ridiculous and way less evil).

Carry On was truly ridiculous in the best way. As long as you don’t expect a really deep story with life lessons in it and see it as the entertaining, laughable book it is you’ll love. Even the spells were a bit ridiculous. In the world of Simon Snow, words are the key to spells, therefore song lyrics and popular sayings were used as spells. Oddly, this became very funny to me. Also, I loved almost all the characters, especially Simon’s friend, Penelope, who reminded me of Hermione.

Side note: If you’re wondering why I’m comparing all these characters to Harry Potter you need to read Fangirl. If you don’t want to read Fangirl all you need to know is in the world of Fangirl, the Simon Snow books are on the level of Harry Potter. They’re a series of books about a British boy who’s an orphan and discovers he has magical powers. Sound familiar yet?

But like I said Carry On airs on the side of the ridiculous. It’s not as serious as HP and it’s way more gay. And although there are some deaths it’s definitely not on the level of heartbreak that J.K. Rowling put fans through, mostly because you only have one book to get invested in these characters instead of seven.

Overall, Carry On made me laugh and swoon and even shed a tear, which is all I could ask for from this book. Fangirl is still my favorite book by Rowell but this is a close second.

6 thoughts on “Book Review: Carry On”