This week I had the chance to interview undercover author, Cate Cameron, who’s new book, Playing Defense (Corrigan Falls Raiders Series), will be released on March 7. Check out her amazing writing history and her tips for aspiring writers below. 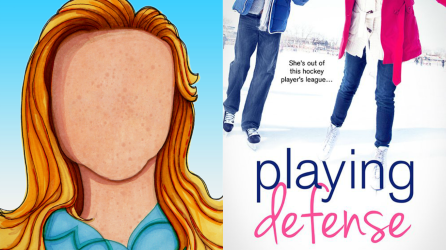 When did you first start writing?

What made you decide to write romance novels?

I started writing with fanfiction, and romance is a BIG part of that style of writing, so–it just seemed natural, I guess. I don’t remember ever really deciding. I just wrote, and–romance!

Do you think you’ll switch genres or stick with romance?

I’ve tried to switch – actually, the first version of Center Ice [the first book in the Corrigan Falls Raiders series] wasn’t really a romance – it was Karen’s story about coming to the new town and dealing with her family and all that, and there was no Tyler at all, as I recall. And a couple years ago people were saying that the [New Adult] genre was about to bust out of its erotic romance boundaries and I got all excited about that and wrote a NA kind of urban adventure about this girl who is lured into the world of jewel thievery and has her loyalties tested, etc… but as soon as it was done, people backed off from NA being non-romance, so now it’s really hard to sell without building up the romance elements!

So, yes, I’d love to switch genres a bit – but nobody else seems to want me to!

Who are some of your favorite writers?

As a kid, I loved SE Hinton and Anne McCaffrey [for] distraction, and I still have a soft spot in my heart for both of them, although I’m aware that McCaffrey, especially, can be a bit problematic.

As an adult, I have a tendency to overdose on authors when I find one I like. The first book is good, so I read more and more and then I hit one I don’t like as much and my expectations have gotten so high that “don’t like as much” feels like “absolutely hate” and then I give up on the author. I’m not saying I’m proud of this pattern, but… you asked! So I don’t really have a favorite author, these days, and I’m trying to keep it that way so I won’t start the whole stupid cycle over again.

What is your new novel, Playing Defense about?

Playing Defense is about Claudia, a shy, serious student, whose life is turned upside down when she’s assigned to tutor Chris Winslow, a hockey player who doesn’t really care about school. Claudia finds herself swept up into his hockey player life, and she also finds herself swept off her feet. But for someone like Claudia, that’s more frightening than exciting, so she has to really struggle to accept the relationship. Chris, on the other hand, isn’t sure he has much to offer someone like Claudia–and Claudia’s parents really don’t help make him feel any more secure about that!

Will Karen and Tyler from Center Ice play a big role in this novel?

Karen has a bigger role than Tyler. They’re both there, but Claudia and Karen really bond, and form a sort of club [that] they call the Sisterhood of Awesomeness, dedicated to trying to challenge members to live their most awesome lives and get over their fears. It’s a bit hokey, but I like it anyway!

Are there any other projects you’re working on right now? Will there be another Corrigan Falls book?

There’s a third Corrigan Falls book, this one [is] (hopefully) just about done with editing – there’s been talk of it coming out as early as May, but I’m not really sure if that’s going to happen.

It’s a fun one because this time the female lead is a hockey player, one who grew up playing with the boys (including the male lead) and kind of resents them for having their NHL dreams, leaving her behind.

Do you have any advice for young/aspiring writers?

Mostly I’d just suggest that writers focus on having fun and on telling the kinds of stories they want to read. Enthusiasm goes a long way, and as a reader, I feel like I can tell when a writer is just phoning it in because [they’ve] heard that something sells. Writing is fun – enjoy yourselves!