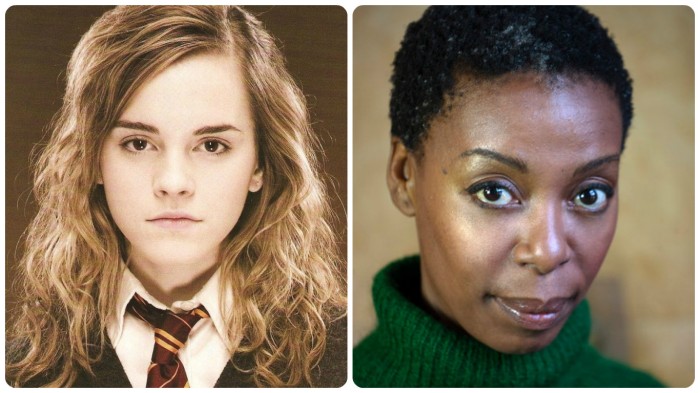 If you haven’t heard the name, Hermione, at least once the week, you must’ve been living under a rock because it’s practically blown up my Newsfeed and Tumblr dash for the past few days.

But if you haven’t already heard the news, actress Noma Dumezweni has been cast to play Hermione Granger in the eighth installment of Harry Potter, which will be in the form of a play in England.

Of course people have their issues with this, as was probably to be expected when they made this casting decision, but honestly I could care less. J.K. Rowling has since issued this statement via Twitter:

Therefore as far as I’m concerned if she’s saying skin tone was left unspecified I’m going to believe her because, full disclosure, I haven’t finished reading the Harry Potter books yet anyways. But moreover, I feel like if anyone would know the race of their characters it would be the author.

But this post isn’t to dive in and try to say what skin color Hermione should or shouldn’t be. Honestly, I love the idea that Hermione is black but I also loved Emma Watson as Hermione. Truthfully the way I see it is Hermione’s race doesn’t change who she is and the fact that people are getting so upset at even the idea that Hermione could be a POC shows a lot about them as a person than it does about anything else. Just because Hermione is being played by a POC that doesn’t change how smart, beautiful, brave, and down right awesome Hermione is.

Hence why Hermione, no matter what race she is, is my woman crush Wednesday this week. She’s beautiful inside and out and I wish I could see this play live. I’m sure Dumezweni will kill it and I’d love to see her and Emma Watson meet and discuss what it’s like to play Hermione.

Honestly, I kind of find this whole situation funny because when POCs get mad that a white person is playing someone that was a POC in HISTORY, as in there is no way the person’s race could possibly be misinterpreted, many (not all) white people don’t see what the big deal is or can’t understand why it’s an issue. But God forbid a POC is put in to play a FICTIONAL character who’s race was never specified in the first place and (white) people get upset about it.

Can we just acknowledge the fact that Hermione’s race played no role in the Harry Potter novels? Her being white or black has no affect on the bad assery that is Hermione Granger. The fact that she’s a mudblood was the most important characteristic about Hermione and that hasn’t changed. So just accept that Hermione will now be played by a POC actress and let’s move on. Because honestly no matter how upset some people are, Dumezweni got the role fair and square and no one can take that away from her.

“As the Dark Lord becomes ever more powerful, your race is set still more firmly above mine! Gringotts falls under Wizarding rule, house-elves are slaughtered, and who amongst the wand-carriers protests?”
“We do!” said Hermione. She had sat up straight, her eyes bright. “We protest! And I’m hunted quite as much as any goblin or elf, Griphook! I’m a Mudblood!”
“Don’t call yourself —” Ron muttered.
“Why shouldn’t I?” said Hermione. “Mudblood, and proud of it!”