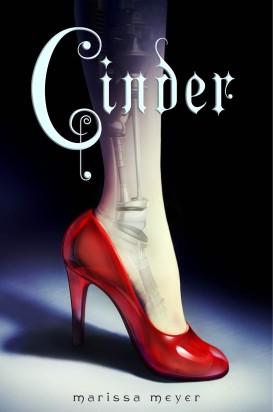 Humans and androids crowd the raucous streets of New Beijing. A deadly plague ravages the population. From space, a ruthless lunar people watch, waiting to make their move. No one knows that Earth’s fate hinges on one girl. . . .

Cinder, a gifted mechanic, is a cyborg. She’s a second-class citizen with a mysterious past, reviled by her stepmother and blamed for her stepsister’s illness. But when her life becomes intertwined with the handsome Prince Kai’s, she suddenly finds herself at the center of an intergalactic struggle, and a forbidden attraction. Caught between duty and freedom, loyalty and betrayal, she must uncover secrets about her past in order to protect her world’s future.

Every day I get this awesome book deals from BookBub (if you’re not signed up yet, do so immediately) and there was a deal to get Scarlet, the second book in the Lunar Chronicles, for only $1.99. Even though I hadn’t read Cinder yet, I’d heard great things so I jumped on the deal and bought.

Not too long after I went to Target and there was Cinder for 20 percent. Of course I had to buy and now I’m hooked. I just finished Scarlet so get ready for that review but for now let’s focus on the first book in this series.

Honestly, I don’t know how this series has flown under my radar for so long. I absolutely love Cinder. She’s such a great character. As a cyborg she’s a second-class citizen and is treated poorly by her mother and step-sister, Pearl. Cinder’s only friends are the android, Iko,  and her other step-sister, Peony.

I really liked how the Cinderella fairytale was used in this story. The fact that Cinder had a mechanical hand and foot are so cool to me. I also really liked the mystery surrounding her since she doesn’t have any memories before the age of 11 (she’s 16 now). Although I will admit it was pretty predictable I still loved it.

And of course I loved the male lead, Prince Kai. He’s cute, funny, and a generally good person that doesn’t deserve the weight load of stress he’s constantly under. There so many times throughout this novel I just wanted to give Kai a hug.

Overall, I also really liked how this story was written. Told in the third person, the narration mostly follows Cinder but we also get to peer in on what’s happening with Kai as well, which I really liked.

If you haven’t checked out this series yet, do so ASAP. It’s worth every penny.

“Even in the Future the Story Begins with Once Upon a Time.”

Blog of a Bookaholic

Zakiya is a recent graduate from Georgetown University with a A.B. in English and certificate in TV watching. She's obsessed with all things pop culture and watches about 20 shows a week, give or a take a few. She believes Mindy Kaling is her spirit animal and Tina Fey is her life coach. You can find her at her blog, toborroworbuy.com. [twitter: ZakiyaJamal] View all posts by Zakiya N. Jamal

Q: What are your currently reading? 📚 I've been holding onto this shelfie for a while because I wasn't sure if it fit my theme but today I decided to YOLO it because I haven't posted in ages! Also, I wanted to remind y'all that the first In the Books chat is happening tonight at 8 pm EST so don't miss it! 😉