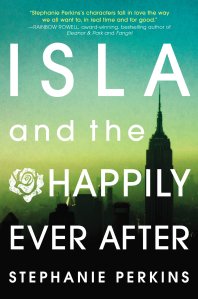 Hopeless romantic Isla has had a crush on introspective cartoonist Josh since their first year at the School of America in Paris. And after a chance encounter in Manhattan over the summer, romance might be closer than Isla imagined. But as they begin their senior year back in France, Isla and Josh are forced to confront the challenges every young couple must face, including family drama, uncertainty about their college futures, and the very real possibility of being apart.
Featuring cameos from fan-favorites Anna, Étienne, Lola, and Cricket, this sweet and sexy story of true love—set against the stunning backdrops of New York City, Paris, and Barcelona—is a swoonworthy conclusion to Stephanie Perkins’s beloved series.

I related to Isla so much. I absolutely loved her character and sympathized with her insecurities. Isla had a crush on Josh for years so of course, when they finally get together she struggles to believe his feelings for her are real. This leads to problems in their relationships but there were also other, outside issues.

Just as in Anna and the French Kiss, Josh continued to not care about school and eventually it catches up to him in the worse possible way, putting added strain on his relationship with Isla. Along with this, Isla has to learn to balance her friendship with her best friend, Kurt, with her relationship with Josh.

I absolutely loved this book. Isla and Josh were great characters and I totally fell for their relationship. Additionally, I found it interesting that Stephanie Perkins included an autistic character in this novel. I don’t think I’ve ever read a novel with an autistic character that was front and center for most of the novel, so that was really great.

And as promised Anna, Etienne, Lola, and Cricket did in fact make an appearance, although it was much less than the big roles Anna and Etienne played in Lola and the Boy Next Door. Even so, the little scene we got with all of them together was so perfect that it was enough for me. And I have since read that scene multiple times. So good.

Overall, this book was definitely my favorite out of all three and I highly recommend this whole trilogy.