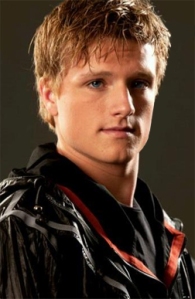 Oh Peeta. He’s such a sweetie. Until you try to hurt Katniss. Or President Snow makes him crazy and … hurt Katniss. He’s a complicated individual.

Honestly though, Peeta is a cute and sweet guy. He tries his best to do what he believes is right and he loves Katniss so fiercely it’s hard to believe it’s real. I was team Peeta from day one (but let’s face it Gale is hotter) and I think he’s the perfect compliment to Katniss’ fierce personality.

Additionally, Peeta isn’t just a softie though. He turns out to be really strong and more than that he stands up for himself. He may love Katniss but he doesn’t always like or agree with what she does and tells her so. I like that Peeta is kind and caring but not a push over. He’s my fave.

“Peeta, how come I never know when you’re having a nightmare?” I say.
“I don’t know. I don’t think I cry out or thrash around or anything. I just come to, paralyzed with terror,” he says.
“You should wake me,” I say, thinking about how I can interrupt his sleep two or three times on a bad night. About how long it can take to calm me down.
“It’s not necessary. My nightmares are usually about losing you,” he says. “I’m okay once I realize you’re here.” – Catching Fire