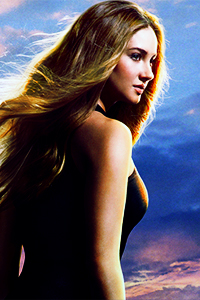 Oh Tris. My love for Tris was very up and down throughout the trilogy. I liked her in Divergent, hated her in Insurgent, and loved her in Allegiant.

What’s great about Tris is she’s kind, selfless, strong, and independent. She’s willing to leave her faction because she believes it’s what’s best for her. She sacrifices herself time and time again for the people she cares about. And she’s fierce when she needs to be.

I know a lot of people hate the ending of the trilogy but I didn’t. I had my issues with it but Tris’ actions wasn’t one of them. I liked how her story ended and I appreciated Veronica Roth keeping it real. The only reason I didn’t really like it was because of Four.

Moving on, Tris is great. She’s kind of awkward in the beginning because of her Abnegation upbringing but she’s also not afraid to stand up for herself and friends. From there she continues to be brave (although she has her slip ups) and she’s an overall good person. Check her out in the Divergent trilogy (the books not the movies).

One thought on “Woman Crush Wednesday: Beatrice “Tris” Prior”