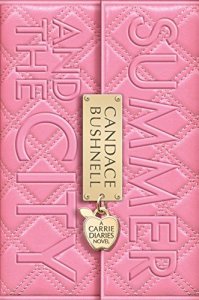 Meet teenage Carrie Bradshaw as she hits the bright lights, big city of New York for the very first time! Find out how Carrie transforms from country girl to super-cool fashionista in the second explosive CARRIE DIARIES novel from the globally bestselling author of SEX AND THE CITY. Summer is a magical time in New York City and Carrie is in love with all of it – the crazy characters in her neighbourhood, the vintage-clothing boutiques, the wild parties and the glamorous man who has swept her off her feet. Best of all, she’s finally in a real writing class, taking her first steps toward fulfilling her dream. This sequel to THE CARRIE DIARIES brings surprising revelations as Carrie learns to navigate her way around the Big Apple, going from being a country “sparrow” – as Samantha Jones dubs her – to the person she always wanted to be. But as it becomes increasingly difficult to reconcile her past with her future, Carrie realises that making it in New York is much more complicated than she ever imagined. With her signature wit and sparkling humour, Candace Bushnell reveals the irresistible story of how Carrie met Samantha and Miranda, and what turned a small-town girl into one of the New York City’s most unforgettable icons, Carrie Bradshaw.

Although this book has it’s faults, the fact that it shows how the famous Sex and the City group came to be makes this book worth the buy. If you haven’t read The Carrie Diaries yet and don’t want to be spoiled stop reading here. You’ve been warned.

This book picks up right around where we left off. Carrie’s getting her bearings in NYC with Samantha Jones as her sophisticated mentor. Additionally, the purse that Carrie lost at the end of The Carries Diaries is found by Miranda Hobbes, leading to the start of another beautiful friendship. Young Samantha Jones and Miranda Hobbes made this book for me. Samantha is struggling to become the woman her fiancé wants her to be and Miranda is a fiery feminist who makes a lot of valid points.

The novel is a slew of new characters and only a few appearances by the people in Carrie’s “past life.” Although I’d usually be against a sequel that completely drops the characters of the first novel, Candace Bushnell makes the right choice here. Carrie’s family and high school friends just don’t fit Carrie’s NYC narrative and the parts where they do show up were my least favorite.

Overall, I really enjoyed this novel. Carrie’s gone from naive, suburban teen, to an arrogant young adult. Although she annoyed be from time to time I much preferred Carrie’s confidence to her pushover lifestyle. Additionally there were so many characters to love in this novel. Besides the Sex and the City crew there’s Carrie’s classmates including Lil’, who turns out to be way more interesting than I first thought, Capote, the know it all, and Ryan, the flirt with a model fiancé.  There’s also Carrie’s professor who has a strange mustache that Carrie names Waldo, and Carrie’s quirky city friends including a famous playwright who turns out to be more trouble than he’s worth.

My only issue with the novel is it’s very focused on sex and Carrie losing her virginity. This in it of itself isn’t the problem for me. The problem is that if that’s the focus of the novel I don’t appreciate when it’s finally Carrie’s time to find out what the big deal is about sex the scene is skipped over and then talked about in the past tense. Why not give it to me in the present? Why have her wake up and say, “Oh yeah that happened.” I understand this is a children’s book and I’m not looking for anything on a Fifty Shades level, I was just expecting more from this moment that was so built up in this book and the last.

Despite that, I still really liked this novel and definitely think it’s worth your money and time.

Confessions of a Book Addict