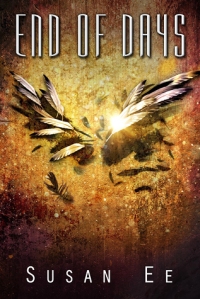 End of Days is the explosive conclusion to Susan Ee’s bestselling Penryn & the End of Days trilogy.

After a daring escape from the angels, Penryn and Raffe are on the run. They’re both desperate to find a doctor who can reverse the twisted changes inflicted by the angels on Raffe and Penryn’s sister. As they set off in search of answers, a startling revelation about Raffe’s past unleashes dark forces that threaten them all.

When the angels release an apocalyptic nightmare onto humans, both sides are set on a path toward war. As unlikely alliances form and strategies shift, who will emerge victorious? Forced to pick sides in the fight for control of the earthly realm, Raffe and Penryn must choose: Their own kind, or each other?

With World After I was disappointed with the lack of Raffe and Penryn scenes. End of Days completely makes up for that (thank you Susan Ee).

Similar to World After, End of Days picks back up right where the last book left off. I love all the books in this trilogy just about equally but this book may have been the best end of a dystopian trilogy I’ve ever read. I still have some lingering questions (we’ll get to those later) but overall Ee did an excellent job of wrapping things up perfectly.

In this novel Ee gave us a lot of action, the same amount of gruesome scenes, the perfect amount of romance (enough to appeal to my shipper heart but not so much that it felt like chick lit), and she gave us a kick butt heroine who still had the hormones of a teen but didn’t let that stop her from being, “Penryn Young. Daughter of Man. Killer of Angels.”

Seriously, Raffe is hot and all that but Penryn made this book for me. I’m so tired of seeing these dystopian heroines being portrayed as the hero but they actually do nothing. Katniss, although great, really didn’t change anything. She was just a symbol. Tris did actually change things but I’ll save my comments about that for my review of Allegiant.

My favorite part about End of Days was Penryn really coming into her hero role. She was making her way there throughout the novels with multiple heroic acts but this was the first time we really got to see Penryn be a leader and I loved it. No matter what her feelings are for Raffe she never lets that get in the way of protecting herself, her family, and mankind from the angels. To me that makes Penryn the ultimate boss. You go girl!

Now if you don’t want to be spoiled stop reading here because although I loved the book there’s one question that was not answered that needs to be brought up.

Again, stop reading if you don’t want to be spoiled.

Last warning, there are spoilers ahead.

Have you left yet? Okay, good.

Overall the book was great and yes it tied up the trilogy nicely and I’m so glad Raffe and his Watchers (who are my favorites, by the way) are staying on Earth and Raffe and Penryn get to live happily ever after. Except, do they? Because isn’t Raffe basically immortal? So won’t he not get older? How will that work?

They can get married and have kids but Penryn will age and Raffe won’t. How will they handle that? Or is Raffe somehow mortal now? I need to know! Ee please answer my questions. Give me a short story or something.

Moreover, do a second epilogue because honestly I could’ve done without the first one. It didn’t really add anything to the book other than letting us know Paige will be okay, which really could’ve been just another sentence in the last chapter to be honest. Why give us an epilogue and not explain Raffe’s immortality? Or go further into the future and so the world actually becoming better and the angels being gone. I rather the book just ended with the last chapter because the epilogue was truly disappointing.

Even so, I still love this book and the trilogy as a whole. A job well done indeed.

‘You accept me just the way I am, regardless of whether or not I even have wings. Even when I had my demon wings, you’ve never looked at me with pity. You’ve never wavered in your loyalty. That’s who you are—my brave, loyal, lovable Daughter of Man.’

Stars: 5 out of 5. Even with the unanswered question I still have to give this book five stars. I’ve reread scenes from this book so many times it’s kind of embarrassing.

Borrow or Buy: Buy. Is this a real question?

Love is not a triangle