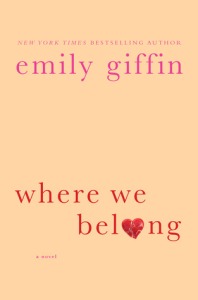 *This book is part of my POPSUGAR 2015 Reading Challenge*

Marian Caldwell is a thirty-six year old television producer, living her dream in New York City. With a fulfilling career and satisfying relationship, she has convinced everyone, including herself, that her life is just as she wants it to be. But one night, Marian answers a knock on the door . . . only to find Kirby Rose, an eighteen-year-old girl with a key to a past that Marian thought she had sealed off forever. From the moment Kirby appears on her doorstep, Marian’s perfectly constructed world—and her very identity—will be shaken to its core, resurrecting ghosts and memories of a passionate young love affair that threaten everything that has come to define her.

For the precocious and determined Kirby, the encounter will spur a process of discovery that ushers her across the threshold of adulthood, forcing her to re-evaluate her family and future in a wise and bittersweet light. As the two women embark on a journey to find the one thing missing in their lives, each will come to recognize that where we belong is often where we least expect to find ourselves—a place that we may have willed ourselves to forget, but that the heart remembers forever.

*This review will contain minor spoilers!!!*

I fell in love with Emily Giffin’s books when I read Something Borrowed I don’t even know how many years ago. I haven’t had a chance to read a lot of her books but thankfully one of my friends bought me three and I finally got a chance to dive in.

Where We Belong tells the story of Marian who’s world gets turned upside down when her daughter, who she gave up for adoption, shows up on her doorstep. Marian has been keeping the secret about her daughter for the past 18 years. Only her mother knew about the baby and the adoption and Marian has been trying to keep it that way ever since.

Unfortunately for her Kirby, Marian’s daughter, not only shows up at her apartment but comes with questions, mainly who’s her father? Marian is then forced to confront the past she’s so nicely tucked away. This is made even worse when she’s right in the midst of trying to convince her long time boyfriend to marry her.

Switching between the points of view of Marian and Kirby, Giffin crafts an amazing story of love and family. She shows how one decision Marian made when she was only 18 changed her life forever and how Kirby’s life completely changes when she herself turns 18. It’s interesting because although Marian is 18 years older than her daughter they both seem to grow up in this novel just in different ways. For Marian it was realizing what she really wanted for herself and her life. For Kirby it was finally realizing that her life, despite it’s craziness, isn’t as bad as she first thought it was.

I fell in love with both Marian and Kirby (I loved Kirby a little bit more) and was rooting for them the whole book. I really like Kirby’s wit, sarcasm, and love for music and I loved the relationship Marian and Kirby create together. It’s awkward and hard to understand but it’s also a good one.

My only problem with the book was the ending. It wasn’t terrible but I definitely wanted more from it. I could’ve used two more chapters at the end to tie things up. Otherwise, this is definitely a must read.

But now I can see that there is redemption and beauty in an accident emanating from love.

Borrow or Buy: Definitely buy. This is a goodie y’all want on your book shelf.

One thought on “Book Review: Where We Belong”