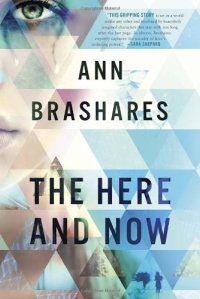 An unforgettable epic romantic thriller about a girl from the future who might be able to save the world . . . if she lets go of the one thing she’s found to hold on to.

Follow the rules. Remember what happened. Never fall in love.

This is the story of seventeen-year-old Prenna James, who immigrated to New York when she was twelve. Except Prenna didn’t come from a different country. She came from a different time—a future where a mosquito-borne illness has mutated into a pandemic, killing millions and leaving the world in ruins.

Prenna and the others who escaped to the present day must follow a strict set of rules: never reveal where they’re from, never interfere with history, and never, ever be intimate with anyone outside their community. Prenna does as she’s told, believing she can help prevent the plague that will one day ravage the earth.

But everything changes when Prenna falls for Ethan Jarves.

Honestly I went into this book with low expectations. I loved The Sisterhood of the Traveling Pants series but I wasn’t sure how Ann Brashares would fair in the sci-fi genre. Overall, I think she did okay.

I can’t say I’ve read a lot of time traveling books but I have seen a lot of movies and Brashares does something different with her novel. Most often when people time travel it’s usually just one person and it’s for a specific purpose. In this novel although the time traveling group claimed their purpose for going to the past was to prevent their terrible future it immediately becomes clear that is not the case.

Rather, they have actually just made a move to the past to have a better life, the same reason many people immigrate from other countries today. They create their own little society in the midst of the past (our present) and start new lives.

What I found most interesting is Brashares combines two different genres because although it’s centered around time-travel it also has a dystopian aspect to it as well. The messed up future that Prenna and the other travelers leaves is definitely a dystopia, in this instance caused by climate change. The society that the travelers create in our present, however is also a dystopia with the type of surveillance and “Big Brother” watching that is typical of dystopian fiction (1984, anyone?).

Besides that, Brashares then adds the romanic plot that to be fair appears in almost any time travel story but makes this book a little more interesting. The love that appears between Prenna and Ethan is a good one that is ultimately destined to fail. Despite that idea you can’t help but root for them and want them to work. That’s what a forbidden romance does to a reader.

The love story intertwined with the time traveling made this a very interesting read that I couldn’t put down. I wanted to know how it all ended, how everything was going to come together, and what all the little clues Ethan and Prenna discovered meant. Brashares did a good job of answering most of those questions but there were still some at the end that I’d like to know more about. For example, (SPOILER ALERT!) why did Prenna have that date on her arm when she first arrived in 2010? Did her father write it on her arm before she left? We never find out and I think this is important. What’s also important is why can Ethan tell who’s a traveler? Is it really because he happened to see Prenna when she arrived in our present or something more?

I think there’s so much more that could happen with this story and I’d be interested in a sequel. Brashares hasn’t said yet whether there will be one but I truly hope so. I wanted to know more and I was not satisfied with the ending of this novel at all. I guess you could say it didn’t exceed my expectation, unfortunately.

“When you open yourself to somebody, when you feel these thing that you feel, well, what do you do? You can try to ignore it, maybe you can try to forget about it, but you can’t undo it and you can’t give it back.”

Stars: 3 out of 5. I think this book definitely was good in that it kept me interested but there’s too many unanswered questions for me to really feel satisfied with it. Moreover, I wasn’t a big fan of the ending.

Borrow or Buy: Borrow. I can’t see myself rereading this book. Not one you need on your shelf.