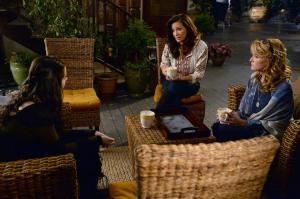 Emotions were running high on this week’s episode of Switched at Birth. After Toby told Lily about what happened to Bay she had to report it to Melody who then reported it to the university. Now that it’s in the university’s hands every one who was at the party is called into questioning about the events of the night and it quickly becomes clear to everyone who’s involved in the incident.

Bay quickly realizes she can’t keep this under wraps anymore and she’s going to have to face what happened. After Daphne goes to Regina for advice about a “friend” who went through the same situation as Bay’s “friend” Regina realizes that they were both probably talking about Bay. Regina then goes to Kathryn for help and they both confront Bay to try and get answers and help her. Bay, however, doesn’t want to talk about it. Feeling guilty for putting Tank through this when she’s not really sure what happened makes her feel like maybe she made a mistake. However, she can’t help but like she was violated that night.

After Kathryn confesses to Bay that she was sexually assaulted as a teen and never told anyone, she tells Bay that only Bay knows how she feels. Bay then decides that she does want to talk to the Title IX coordinator at UKC who’s handling the case. Bay attempts to explain to the coordinator that she’s not really sure what happened that night and she doesn’t think Tank meant to hurt her. However, she did wake up feeling like something was wrong but she thinks Tank just made a mistake and that there’s a lot of factors to take in. Despite her best efforts Tank was still expelled from UKC making Bay feel even worse.

Meanwhile, because everyone found out Bay was the person who was sexually assaulted, she knew she had to tell Emmett what happened. However, when she tried to explain to him what happened Emmett didn’t want to hear it, only thinking that she cheated on him with Tank and not wanting to hear the whole story.

To help Bay, Daphne flies to L.A. to talk to Emmett and try to convince him to hear Bay out before passing judgement. Honestly, I understand why Emmett was mad but seeing as how he cheated twice (let us not forget that kiss with Daphne) I think he owes it to Bay to at least listen. Moving on, Daphne tells Emmett that Bay was raped (strong choice of words but we can deal with that later) and suddenly Emmett is listening. Good thing too since it seems he was on his way to hooking up with his new “friend”. That definitely would’ve made the situation 10 times worse.

When Daphne returns home Bay asks her how it went and in response Emmett walks in. Yay! Hopefully these too can work it out. If they break up again I don’t think my shipper heart can handle it.

A lot of things happened in this episode that I’m not sure I agree with. First, Daphne telling Emmett that Bay was raped was a lot. Yes I understand Bay was drunk and blacked out and obviously that’s a huge problem but no one really knows what happened that night. Not even Bay. Tank definitely made a mistake. He shouldn’t have slept with her when she was that drunk but I’m not sure I would jump to use “rape” when it’s such a sticky situation.

Additionally, Travis and Mary Beth’s fight bring up some real questions. I love Mary Beth and I kind of get what she’s saying but it also felt like victim shaming. Of course Bay drank too much but Bay was going through a tough time and she probably didn’t even realize how much she was drinking. Is it her fault that Tank chose to have sex with her when she was so wasted she couldn’t even remember it? Although I know Mary Beth didn’t mean it this way all I could think while she was speaking is this is why rapists don’t get charged and victims don’t want to come forward. Because people say they shouldn’t have been wearing that dress or drinking that much or be out so late. I had to take Travis’ side in this argument. Bay shouldn’t be blamed for what happened to her. Period.

Tonight’s episode looks like it’ll be intense. With everyone trapped inside by a storm, drama is sure to ensue. Hopefully Bay and Emmett come out on the other side, together. Check out the preview below.