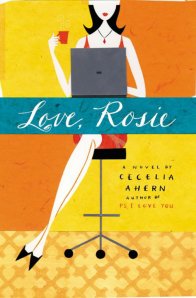 What happens when two people who are meant to be together just can’t seem to get it right.

Rosie and Alex are destined for each other, and everyone seems to know it but them. Best friends since childhood, the are separated as teenagers when Alex and his family relocate from Dublin to Boston. Like two ships always passing in the night, Rosie and Alex stay friends, and though years pass, the two remain firmly attached via emails and letters. Heartbroken, they learn to live without each other. But destiny is a funny thing, and in this novel o f several missed opportunities, Rosie and Alex learn that fate isn’t quite done with them yet.

I’ll admit I’m a hopeless romantic so I’m a sucker for a good love story and this one is great. I first heard about this book because it’s now a movie and of course I had to read the book before I saw the film (although of course the movie will disappoint me now).

The story follows Rosie and Alex, best friends since the age of seven, who go through multiple up and downs but always find there way back to each other. As friends of course. It was like watching a dance reading this book. They would come together and I would think finally they’re going to be together but then something/someone always got in the way.

The book is written entirely written in emails, letter, and instant messages sent not only between Alex and Rosie but also between their siblings, parents, other friends, and significant others. It expands over 40 years of time and it’s great watching Alex and Rosie grow up and grow together but also apart.

Definitely a book to check out before you see the movie. Which stars Lily Collins so it’ll definitely be pretty good at least.

Then the laughing stopped and there was this silence. What the hell was it? It was like the world stopped turning in that instant. Like everyone around us had disappeared. Like everything at home was forgotten about. It was as if those few minutes on this world were created just for us and all we could do was look at each other. It was like he was seeing my face for the first time.

Stars: 4 out of 5. I loved this book a lot but I wanted more from the ending. I was satisfied with it but after everything that happened in the novel I expected something bigger than what I got.

Borrow or Buy: Buy!!! I loved this book. Definitely one you’ll want to read. And so many good quotes. It was hard to pick just one.

Diary of a Book Girl

Also if you’re not afraid of spoilers check out the trailer for the movie below.