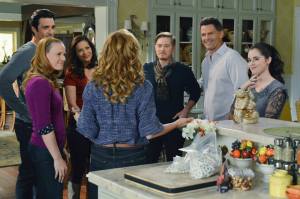 Last Monday’s episode ended with a bang (if you haven’t watched it yet stop reading here; spoilers are included). I thought this was a great episode except there was no Emmett so that was sad.

But to make up for Emmett’s absence (sort of), Toby’s back. Yay! Although his facial hair really should’ve stayed in Iceland.

Let’s begin with the Kennish’s because they had a lot of cute family moments. First, Bay didn’t get into Pratt and I think Pratt can suck it because that’s just dumb. She’s great and I don’t understand how she couldn’t get in (other than the SAB writers just don’t want Bay to be happy). And she wasn’t. She was devastated which broke my heart. Poor Bay.

But then big brother Toby returned and her day got a little bit brighter. Not telling anyone about not getting into Pratt Toby is finally able to get the truth out of her and decides to help a sister out. They plan to do a big art piece and using inspiration from Toby, Bay wants to create the Northern Lights. While planning to sneak out they get busted by Kathryn who wants in.

Thus begins the Kennish adventure. The art mission seems like a go until the electricity goes out and Bay kind of loses it. She rips Kathryn a new one basically telling Kathryn she’s not a “real” writer. Ouch. Although I know Bay is hurting because of Pratt that’s still no way to talk to your mom. Like ever. Kathryn, of course, is furious and would’ve stomped away if security hadn’t shown up.

To Bay and Toby’s amazement Kathryn is able to talk them out of getting in trouble by making up this crazy story about how Toby and Bay are twin, deaf Icelandic artists. After the guard leaves Bay breaks down and reveals to Kathryn she didn’t get into Pratt. Then in a very touching moment John shows up with a generator and all the Kennish’s say a time when they failed at something. Bay feeling revived turns on her Northern Lights and it’s magical (again, Pratt I don’t understand). It was a very cute Kennish moment and I thoroughly enjoyed seeming them be one united happy family.

Speaking of cute family moments Daphne and Angelo’s bonding time in this episode was fantastic. Their budding father-daughter relationship is adorable and I love it. Daphne is freaking out because of her SATs and Angelo helps her relax by distracting her in one of her favorite places: the kitchen. He tells her he needs help figuring out one of his grandmother’s recipes and suggests they make various different cakes until they get it just right. After they figure it out and Angelo admits he took no notes so they’ll have to do this process all over again at some point, Daphne finds a foreclosure notice. That’s when Angelo reveals that the restaurant is going out of business and he’s in a bit of a money crisis. After breaking down a little bit Daphne is there for him and then they take the cutest selfie ever.

While Daphne and Angelo are becoming closer than ever Regina is out to dinner with Wes who just gave her a gun for protection that she now knows how to use and shoot. Yeah, this won’t end badly. Regina and Wes go to dinner and guess who joins them? None other than Senator Coto (or is it former senator? Not sure on that front). Anyway some how Coto doesn’t recognize Regina and remember that her daughter blackmailed him. That would’ve been pretty interesting if he had though.

Wes had planned to get into a (not so legal) partnership with Coto but instead refuses to do so once Regina tells him the truth about how she knows Coto. You go Wes! About the only good thing he’s done so far. I’ll admit he’s growing on me. I still don’t like him with Regina and I definitely think he wants to be with her in a more personal than professional way that I don’t approve of but at least he’s becoming a better person.

After dinner Regina heads to K&D and is upstairs when Daphne comes in looking for her SAT book. Daphne calls out but Regina doesn’t hear her. Daphne then heads upstairs because she can hear Regina up there and Regina calls out hearing someone in the store. Of course, Daphne can’t hear her. Regina then gets her gun and gets ready to shoot and Daphne comes face to face with Regina’s gun. Oh, dear.

Daphne is pissed and rightfully so. She’s run downstairs when Angelo comes in and hears the whole story. Now he’s pissed and Regina and him get into a huge, nasty fight. Angelo accuses Regina of cheating and Regina basically tells him he sucks at being a father and a man.

Yes it really is Agent Coulson. Angelo then storms out and speeds off in his car and …

So that happened. Angelo is in serious bad shape. I’m really hoping ABC Family doesn’t kill him off. Angelo and Daphne were really just getting close and truthfully I’m not sure if Daphne could ever forgive Regina if he doesn’t recover. I hope it all works out but honestly I don’t know where the writers are going to take this.