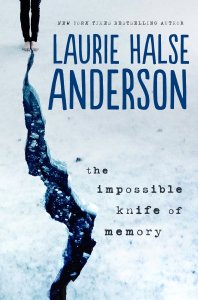 I’ve been a fan of Laurie Halse Anderson since I read Speak years ago. She has this uncanny ability to write about serious topics in a way that isn’t preachy but still drives home a point. This book was no different.

Centered around Hayley and her father, Andy, a veteran suffering from PTSD I wasn’t sure if I would like this book at first. Truthfully, in the beginning I found Hayley to be annoying. She’s very pessimistic and just doesn’t seem to try in anything she does. It’s not until she meets Finn, a strange boy who sees the good in Hayley that I myself couldn’t that I begin to like her.

In the novel, Anderson makes the point of indicating that it’s not only Andy who’s suffering from his service in Iraq. Hayley’s suffering majorly as well. She’s constantly taking care of her father, making sure no one finds out how bad things are at home. Meanwhile, they’re both running from their past, trying to forget the memories that hurt them, thereby leaving them in a limbo mind state.

Although the novel is mostly told in Hayley’s point of view there are some chapters that are Andy’s point of view, mainly his dreams and memories of the war. Sometimes I didn’t care to read these part but I think overall they really added to the narrative.

I really fell in love with this book because of Finn and Hayley. Their relationship made this book for me. What was great about them wasn’t just their shared quirkiness. It was that to Hayley her life was so dysfunctional and Finn’s was so perfect that she couldn’t fathom that maybe it wasn’t. They both struggled with opening up to each other about their issues and what was great was seeing them grow together. They needed each other and I liked them much better together than apart.

These two weren’t the only one’s dealing with family issues, either. Gracie, Hayley’s best friend, also had her own home life issues with her parents getting a divorce. What Anderson did so well was  indicate that teens go through so much that their friends don’t know about or can’t understand. All kids go through something, whether it be big or small, and it always has an impact on their lives. I think Anderson did a good job of showing that.

Additionally, as the novel went on I began to like Hayley even more. I started to root for her. I wanted her to start fighting for what she wanted, to stand up for herself, and to start thinking about her future.

Overall, I thoroughly enjoyed the novel. Hayley and Finn’s quips made me crack up and just the way Hayley viewed the world was both heartbreaking and at times very funny. Her idea that the world consists of “freaks and zombies” and nothing else was interesting. Also, her sass and blatant disrespect for authority figures was very entertaining. Her indifferent attitude was annoying at times but also very enjoyable at others. She’s the definition of a rebel without a cause and I loved it.

What is really great about this novel is Anderson presents Hayley as this girl who has lost so much and has to take on so much responsibility but at the end of the day is still just a kid. She still has child like qualities like throwing tantrums while she still has to do adult things like cleaning up after her drunk father messes.

Hayley was a very complex character and I loved getting to know her and seeing her become such an admirable character that I was very sad to part with her when the book ended. Definitely worth a second (and third) read.

‘I thought you said it wasn’t broken.’

‘Well.’ He braked to a stop as the green light in front of us turned yellow. ‘It might be a little broken.’

‘A little broken is still broken,’ I pointed out.

Stars: 4 out of 5. I’ll admit when I first started this book I was a little disappointed. I just thought Hayley was a very unlikeable character. I’m glad I pushed through that because this is definitely a book that I can see myself reading again. Very good.

Borrow or Buy: Buy. As I said I’ll probably reread this one more times than I should.

4 thoughts on “Book Review: The Impossible Knife of Memory”