I love Lea Michele, truly I do. I fell in love with her as Rachel on Glee and I think she’s a phenomenal singer, which is clear by her success on Broadway and now on Glee.

However, I just don’t think Michele has a voice fit for pop music. I like her as a singer on Broadway singing ballads and belting out heartfelt songs. When she did “New York State of Mind” along with co-star, Melissa Benoist, I thought it was fantastic. She hit all those notes and I probably listened to that song on repeat for days.

But ever since she attempted to do “Baby One More Time” on Glee I have not liked her on pop songs. It just doesn’t sound right to me. Michele sounded like she was trying to hard. I know for that song she was obviously trying to embody her inner Britney but her voice just did not fit the song and there was really no way to fix that. 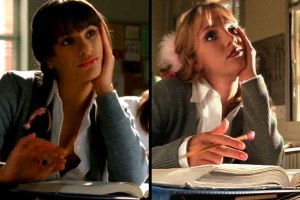 Similarly, this is how I feel about her new single, “Cannonball”, from her debut album, Louder. The song, which was written by the talented Sia, is a great song and I can see why Michele wanted to sing it after the passing of her boyfriend, Cory Monteith.

Even so, I just can’t get with the song because Michele’s voice just doesn’t seem right for it. Her over enunciating of the word “cannonball” along with her attempts at stretching out notes that should just be left alone is not flattering. It’s frustrating because she has a great voice but just not for this song or this type of music.

I’m interested to hear the rest of the album when it is released. I am hoping for the best but currently I am not blown away. Although, I must say the video for the song (found below) is pretty amazing and I do appreciate that it is a tribute song to Monteith. Like I said I love the lyrics I just don’t think this is the song for her but hey, why don’t you take a listen and decide?

2 thoughts on “Should Lea Michele Be a Pop Artist?”