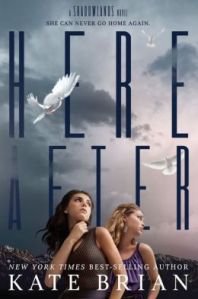 I love Kate Brian (aka Kieran Scott). Literally, I’ve read almost every book she’s written and I just believe she’s generally a great person. I hope to meet her in person one day but until then I’m totally happy stalking her on Facebook and Twitter.

That being said it should be no surprise that I loved Hereafter, the latest book in her newest trilogy, Shadowlands.

The premise of this trilogy (*spoilers ahead if you haven’t read Shadowlands yet*) is Rory along with her father and sister, Darcy, were killed by a serial killer who was stalking Rory. The family was supposed to be on their way to a safe haven to hide from their killer, Stephen Nells, but died before they made it. However, they don’t know this and believe that they are actually in a town called Juniper Landing. The truth, however, is that Juniper Landing is a sort of purgatory where souls go until they are either sent to the Shadowlands (hell?) or the Light (heaven?).

Rory, however, is a special case; she is a Lifer. Its her job along with the other Lifers to help these souls get to their next destination. The Lifers themselves, however, never leave unless they did something really terrible. In this second installment of the trilogy things at Juniper Landing are getting weird; there’s changes in nature that shouldn’t be happening and a lot of suspicious activity occurring including more souls going to the Shadowlands than should be.

Plot summary out of the way I thought this book was fantastic. Brian presented an interesting concept with this new trilogy and in an interesting way. Though the majority of the novel is written from Rory’s point of view there are small chapters every few chapters or so that are written from the “villian’s” point of view. In the first novel it was clearly Nell’s point of view but in this novel Brian adds more mystery by not telling us who that is until the end. Or so she leads us to believe.

I’m not sure I trust Brian enough to believe that we’ve fully solved the case in this last novel. She’s left us with a viable suspect and Rory and her friends seem to believe they’ve caught the culprit but I’m not sure I believe it. Or maybe I’m in denial. Who knows?

Sadly, we won’t know for sure until July 22, when the next and last book in the trilogy is released. That’s a book I’ll definitely be pre-ordering to be directly delivered to my Kindle as soon as it’s out.

I would highly recommend reading this book and obviously the first book in this trilogy. Amongst all the death and souls drama this novel also includes love triangles, family drama, mystery, and of course a lot twists that will keep you guessing until the very end.

Brian has continuously succeeded in writing dark and mysterious novels since the success of her Private and spin-off series Privilege books and it’s evident that she has not lost her touch.

Borrow or Buy: Definitely buy. This is a book you’re going want to read again and again looking for more clues. Unless you’re going to borrow it from a friend who you know will let you read it more than once, this is one you’ll definitely want on your own bookshelf.