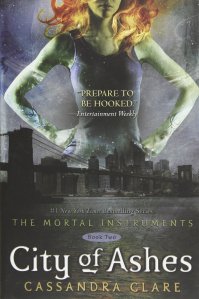 Is love worth betraying everything? Plunge into the second adventure in the internationally bestselling Mortal Instruments series and “prepare to be hooked” (Entertainment Weekly).

Clary Fray just wishes that her life would go back to normal. But what’s normal when you’re a demon-slaying Shadowhunter, your mother is in a magically induced coma, and you can suddenly see Downworlders like werewolves, vampires, and faeries? If Clary left the world of the Shadowhunters behind, it would mean more time with her best friend, Simon, who’s becoming more than a friend. But the Shadowhunting world isn’t ready to let her go—especially her handsome, infuriating, newfound brother, Jace. And Clary’s only chance to help her mother is to track down rogue Shadowhunter Valentine, who is probably insane, certainly evil—and also her father.

To complicate matters, someone in New York City is murdering Downworlder children. Is Valentine behind the killings—and if he is, what is he trying to do? When the second of the Mortal Instruments, the Soul-Sword, is stolen, the terrifying Inquisitor arrives to investigate and zooms right in on Jace. How can Clary stop Valentine if Jace is willing to betray everything he believes in to help their father?

In this breathtaking sequel to City of Bones, Cassandra Clare lures her readers back into the dark grip of New York City’s Downworld, where love is never safe and power becomes the deadliest temptation.

Jace is everything in this book. He makes this book. I’m only here for Jace, honestly.

Okay, now that I got that out of the way let’s talk about the book itself. If you haven’t read of City of Bones yet stop here or you’ll be spoiled.

This novel picks up not too long after the end of City of Bones. We find everyone still reeling from Valentine and the revelation that Jace and Clary are siblings. Clary’s attempting a relationship with her best friend, Simon, Jace is trying to figure out his family situation and being accused of working with Valentine by the Clave, and Luke and Clary are coping with the fact that Clary’s mother still won’t wake up.

The stakes are super high in this book with Valentine building his army. Luckily, Clary and Jace are discovering they have powers of their own and maybe not everything is lost. Plus, Simon steps up in this book, which is great because he was pretty annoying up to that point. Hopefully, now he’ll get a life and stop focusing all his attention on Clary because frankly I don’t think she deserves it. Not that she isn’t great in her own right but she isn’t the end all, be all.

Lastly, I really enjoyed Magnus and Alec’s relationship in this book. It was implied in the first book but this one solidified it a bit more. They probably won’t be holding hands, walking around Central Park anytime soon (if ever) but they’re cute and I like them together. Plus, Magnus is bae.

Borrow or Buy: Buy! I really liked this one and already requested City of Glass from the library.

“That does it,” said Jace. “I’m going to get you a dictionary for Christmas this year.”
“Why?” Isabelle said.
“So you can look up ‘fun.’ I’m not sure you know what it means.”

Zakiya is a recent graduate from Georgetown University with a A.B. in English and certificate in TV watching. She's obsessed with all things pop culture and watches about 20 shows a week, give or a take a few. She believes Mindy Kaling is her spirit animal and Tina Fey is her life coach. You can find her at her blog, toborroworbuy.com. [twitter: ZakiyaJamal] View all posts by Zakiya N. Jamal

One thought on “Book Review: City of Ashes”

Q: What are your currently reading? 📚 I've been holding onto this shelfie for a while because I wasn't sure if it fit my theme but today I decided to YOLO it because I haven't posted in ages! Also, I wanted to remind y'all that the first In the Books chat is happening tonight at 8 pm EST so don't miss it! 😉